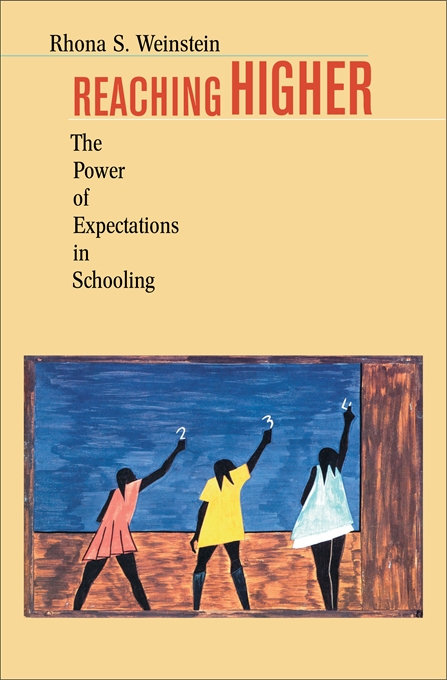 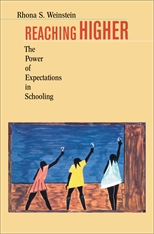 The Power of Expectations in Schooling

“I recommend the book unreservedly to anyone with an interest in education. Some readers will find their assumptions challenged. Others will find moral and intellectual support for their pursuance of an educational system that is just, humane, and not wasteful of human potential.”—Joanna Swann, British Journal of Educational Studies

“Weinstein has undertaken another extension of the discussion [of student achievement expectations] with greater success, and that is to ask what adjustments ought to occur to capitalize on the effect that communicating positive expectations can have on student progress. Those issues are addressed thoroughly and convincingly.”—D. E. Tanner, Choice

“Undaunted by the complexities involved, Weinstein offers a systems approach that demands changes at every point of interaction: students, teachers, parents, administrators, teacher training faculty, and researchers. Implemented systematically across our nation’s schools, her approach would move the next generation’s educational experience into a new level of excellence, lift multiple barriers to learning, and thus change many of our existing, limiting social norms.”—Jean Caspers, Library Journal

“Thinking ecologically about this issue is a tall order, but Weinstein addresses in painstaking detail just what it entails. This is an important book for everyone who believes in the historic promise of equal educational opportunity, and in the possibility that all children can reach their full learning potential.”—Publishers Weekly

“Reaching Higher is a passionate, scrupulously documented book on how schools create educational inequality in America, as teachers convince less socially favored children that they lack the ability to learn and get ahead. Rhona Weinstein closes her searching book with recommendations about how schools might develop a deeper and more agentive self-confidence in today’s schoolchildren, tomorrow’s citizens. This is a must read for anybody concerned with the future of American education, or more broadly, with the future of democracy in America.”—Jerome Bruner, New York University, author of The Culture of Education and Making Stories: Law, Literature, Life

“Here’s a book to give us hope. Parents, teachers, principals and scholars can all benefit from Weinstein’s lucid and passionate demonstration—that our positive expectations for children help them learn and expand their social development. At the same time, Weinstein shows just how much social norms within families and school cultures can limit children’s achievements. The power of the small everyday circumstances in which we communicate our expectations to children is so persuasively documented that readers can look at their own children or students with new insight, and return to them with renewed verve.”—James G. Kelly, University of California, Davis

“Rhona Weinstein, an award-winning teacher–researcher, has produced a scholarly and heartfelt call for different kinds of educational institutions and approaches. Emphasizing the workings of teachers’ expectations, Weinstein shows us life in classrooms, good teaching and bad, and what may, in the future, improve learning—not only for those of whom little is expected, but for all children. Her book is about much more than the educational effects of teacher expectations; it is about excellence in education at every level.”—Robert Rosenthal, University of California, Riverside

“This book could not be more timely. The inadequacies of our schools have become a source of national concern as never before. At the core are two questions: What should we expect of students? And why do schools so clearly fail to help students meet those expectations? Rhona Weinstein has taken the study of self-fulfilling prophecies far beyond the earlier focus on how individuals think and interact, to show how self-fulfilling prophecies suffuse the culture of all educational institutions—and how fateful they can be for society as a whole. Reading this book should make us all reexamine how we look at what goes on in schools. If only I had it when I took my first job as a psychologist over half a century ago!”—Seymour B. Sarason, Professor Emeritus of Psychology, Yale University

“Terms like ‘expectancy’ and ‘self-fulfilling prophecy’ have become so familiar in the discussion of academic underachievement that they have lost much of their meaning. Weinstein’s book gives them renewed force. Reaching Higher is a tour de force exposition of how the expectations we hold for students—often influenced by their background and group identity—form the schooling structures and experiences that can limit human potential. Anybody who cares about equal educational opportunity will never look at the term ‘expectancy’ in the same way again, and will come away with a recharged hope that we can overcome this tenacious problem.”—Claude Steele, Stanford University

“Reaching Higher breathes life into one of the most important issues in education. Weinstein brings school and teacher expectancy effects alive in stories of children, some of whose opportunities to learn were unnecessarily thwarted, some of whom were encouraged to achieve more than they ever thought they could. This is that rare thing, a theoretically path breaking book that will be invaluable in the real world of the classroom.”—Deborah Stipek, Stanford University

“Reaching Higher provides a crucial reexamination of the corrosive effects of low teacher expectancies—not in artificial experimental contexts, but in the complex ecology of students’ and teachers’ lives in the American school system. Reaching Higher should be required reading for all those who are involved in the art and science of shaping student day-to-day experiences and helping them along their future pathways.”—Carola Suárez-Orozco, Co-Director, The Harvard Immigration Project