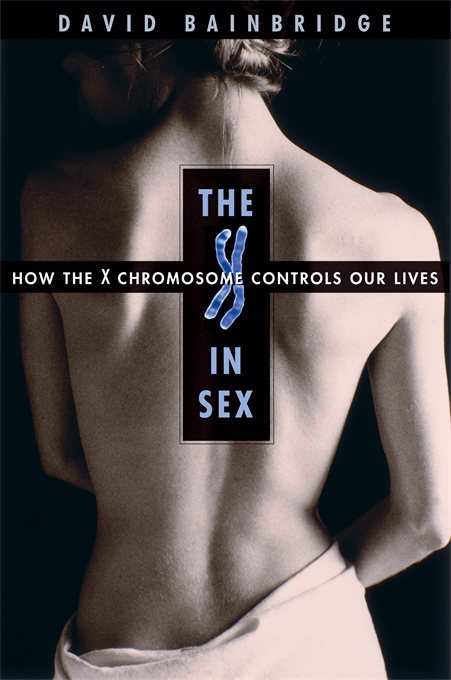 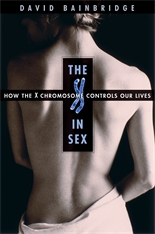 The X in Sex

How the X Chromosome Controls Our Lives

“David Bainbridge’s The X in Sex prove[s] that popular books on human genetics—indeed on human sex chromosomes—need not trade in sociobiological excess… He spends much of his time on ‘sex-linked’ conditions that affect men more than women; these range from annoyances like baldness to devastating diseases like muscular dystrophy. Bainbridge also devotes many fascinating pages to complex ailments like autoimmune disease that, for reasons which remain unclear, disproportionately afflict women… But Bainbridge’s chief concern is with the biology of human sex determination and with the many ways in which it can, and does, go wrong. In the end, his message is that while human beings obviously come in two predominant sexes, both cultural and biological forces give rise to a surprisingly ‘continuous spectrum of gender.’”—H. Allen Orr, The New York Review of Books

“Bainbridge is an essentialist, interested in understanding what aspects of gender are biologically driven, and why… He has a central question he wants to answer. The question is not so much why men and women are different (a worn topic that’s the subject of too many Mars-and-Venus bestsellers) but, far more specific and far more interesting: Why are men and women more different than they need to be?”—Liza Mundy, The Washington Post

“In The X in Sex, David Bainbridge explains the far-reaching effects of X. Bainbridge…moves with ease between straightforward accounts of biology and historical stories about its effect, like the chapter describing the progression of hemophilia through the royal houses of Europe. Bainbridge discusses cultural history as well as natural history, and his wit enlivens every page.”—Christine Kenneally, The New York Times Book Review

“There are many literary stars (such as Stephen Jay Gould, Richard Dawkins and Matt Ridley) in the firmament of writers on evolution, and to a man they write with dash and persuasive logic. David Bainbridge is one such and in his latest book he takes the reader through the glories of the X chromosome at a cracking pace.”—Miriam Stoppard, The Times Higher Education Supplement

“The truth is that the behaviours of [chromosomes] X and Y are inextricably linked. Bainbridge explores this link in a compelling tale that takes in how the sex chromosomes became sex chromosomes, and the very different consequences of this for women and men. Along the way we encounter the Duke of Kent’s testicles, calico cats and non-identical identical twin girls. His story weaves science, history and the history of science (with a little religion for good measure) in a straightforward, anecdotal fashion that will appeal to scientists and non-scientists alike.”—Mark T. Ross, New Scientist

“If you have ever been intrigued by some of the puzzles of genetics—why boys tend to get haemophilia or colour blindness while girls are more likely to have an identical twin or to develop rheumatoid arthritis later in life—then The X in Sex is for you.”—Chris Tyler-Smith, The Times Literary Supplement

“This highly readable book tells the story of the X chromosome from Aristotle’s musings on gender differences right through to a modern understanding of the genetics of the X chromosome. The author’s engaging style makes modern genetics accessible both of the complete layperson and to those of us for whom preclinical genetics are a hazy memory… In a chapter entitled ‘The Duke of Kent’s Testicles,’ Bainbridge describes the unfortunate spread of haemophilia through 19th century European Royal families to illustrate the inheritance of sex-linked disorders. From a disastrous random mutation in a sperm in one of the Duke’s testicles to the Russian Revolution, the history is irreverent but the genetic implications are well illustrated… This slim book is a good read, amusing yet informative and authoritative.”—Alex Connan, Journal of Family Planning and Reproductive Heath Care

“Bainbridge summarizes our knowledge of the genetic information that determines one’s sex by recounting the ancients’ speculations about the genesis of gender, following with modern biologists’ discovery of the X and Y chromosomes about a century ago, and of the sex-determining gene Sry in the 1990s. In a discussion rich with history, evolution, and philosophy, Bainbridge points out the dramatic effect that gender selection has on people’s lives… A fascinating, often humorous analysis of the science of sexuality.”—Gilbert Taylor, Booklist

“The author of Making Babies takes a lively, witty tour of the X chromosome, creator of ‘a delicious symmetry between men and women’… Entertaining and informative… A fine demonstration of science made accessible.”—Kirkus Reviews

“A well-written, well-researched, easy-to-read study that explains what has been learned about the X and Y chromosomes using DNA sequencing and other molecular biology techniques. British biologist Bainbridge…has pulled together historical and current scientific research about how the X and Y chromosomes affect us and what the genes on these chromosomes actually do, like causing sex-linked diseases and color blindness… An excellent example of good science writing… Recommended.”—Margaret Henderson, Library Journal

“In his structure/function analysis of the X chromosome, Bainbridge provides a tongue-in-cheek, yet informative, description of one of the two human sex chromosomes.”—R. Adler, Choice

“David Bainbridge takes us on a fascinating tour of X chromosomes and explains what the possession of these intricately folded, infinitessimally narrow, two-inch long strings of genetic codes weighing almost nothing, means for their bearers—that is for each one of us, male and female. History and personal anecdotes are woven together with up-to-date summaries of the science, punctuated with Bainbridge’s zany—and very British—humor, so that this information-packed book is pure pleasure to read.”—Sarah Blaffer Hrdy, author of Mother Nature: A History of Mothers, Infants, and Natural Selection

“The X in Sex is absolutely fascinating, so intriguing, in fact, that I found myself unwilling to put it down. David Bainbridge surveys an astonishing amount of new information from recent genomic studies of the X chromosome, clearly explaining the findings in a way the average person can easily follow. The science is presented via amusing and highly appropriate metaphors and clever turns of phrase, all of which serve to brighten the prose and present the reader with catchy ways to think about complex ideas. This is an informative, authoritative, and thoroughly enjoyable read: one of the best books I have read in recent years.”—Jane Lancaster, University of New Mexico

“This is wonderful stuff—beautifully written, clear, jargon-free, with anecdotes sure to hold the attention.”—Tim Birkhead, author of Promiscuity: An Evolutionary History of Sperm Competition