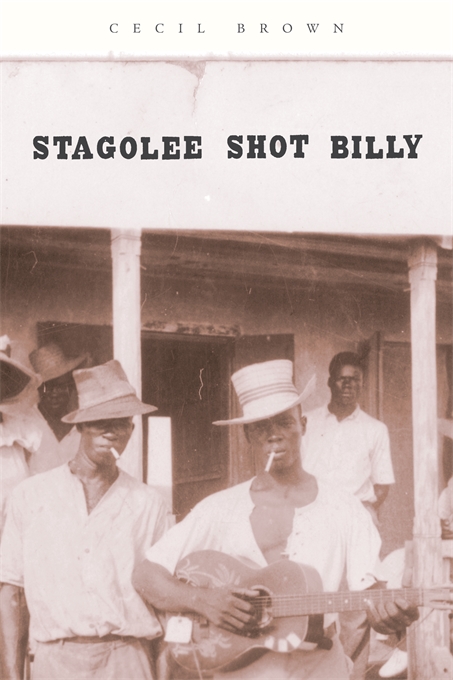 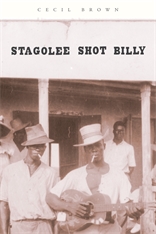 “In Stagolee Shot Billy, the novelist Cecil Brown tracks the history of the song ‘as a black oral narrative and the rich relationship it reveals between oral literature and social life.’ Along the way he has a lot to say about how music functions as a form of memory, advancing through the popular culture… Brown’s industrious research begins at the primal event… In his reconstruction of the legal events that sent Shelton to jail, Brown shows how the black Tenderloin district functioned in white ward-heeling politics of the day… Brown also trains his lens on Stagolee as a mythical presence in literature… By surrounding the Stagolee figure in a constellation of ways, as part of folklore, music history, literary scholarship and culture studies, with a supporting cast of writers and scholars whose words are given fair and generous use, Brown puts on a good postmodern show.”—Jason Berry, New York Times Book Review

“Stagolee Shot Billy provides a fascinating biography of the song [‘Stagolee’], from its shadowy birth in the ragtime era to its afterlife in the age of hip-hop—an evolution, by way of innumerable variants and alternative readings, that shows how vividly a single item of oral culture can reflect changing times.”—Gerald Mangan, Times Literary Supplement

“In Stagolee Shot Billy…Brown revisits the archetypal story of ‘someone who was willing to defend himself if transgressed against, if his dignity was at stake.’ Songs about Stagolee have long been a staple of African-American music, with recordings by Ma Rainey, Duke Ellington, and Fats Domino… To analyze the legend, Mr. Brown draws on structuralist and formalist thinkers such as Mikhail Baktin, Claude Levi-Strauss, and Vladimir Propp… But where another scholar might explicate a few symbols and call it a day, Brown has pursued the tale to its origins—a bar fight in St. Louis in 1895, during which a saloonkeeper named Lee Shelton shot William Lyons when a friendly game of cards went wrong.”—Scott McLemee, Chronicle of Higher Education

“In a St. Louis tavern on Christmas night in 1895 Lee Shelton (a pimp also known as Stack Lee) killed William Lyons in a fight over a hat. There were other murders that night, but this one became the stuff of legend. Songs based on the event soon spread out of whorehouses and ragtime dives across the country. Within 40 years, Stagolee had evolved into a folk hero, a symbol of rebellion for black American males. With commendable scholarship and thoroughness, Brown shows how we got from the murder to the myth.”—Leopold Froehlich, Playboy

“You don’t have to know the ballad about Stagolee, the black anti-hero who shot and killed his old friend Billy over a hat in a bar one Christmas night in 1895 in Deep Morgan, the vice district of St. Louis, to enjoy Cecil Brown’s telling of the story behind the song… Brown, who grew up on the myth in the 1950s and 60s on a tobacco farm in North Carolina, reconstructs the very night when Lee Shelton dressed like a pimp in St. Louis flats and a ‘high-roller, milk-white Stetson’…wandered into the Bill Curtis Saloon in the Bloody Third District. Brown’s reconstruction of the bordello culture in St. Louis is reminiscent of fin de siècle Vienna, portraying a kind of hysteria that played out on the stage and in the streets.”—Susan Salter Reynolds, Los Angeles Times Book Review

“The American Iliad begins with a theft, not of a god-kissed queen, but of a John B. Stetson hat, which is a far more functional item. The exchoes of the crime—indeed, the actual crime report itself—are all here, all the way from Memphis to Sugar Hill and back again.”—Charles P. Pierce, Esquire

“This entertaining book is the first to rigorously explore [the song’s] origins in the St. Louis gang underworld. Brown paints a rich picture of the incident, traces the song’s virus-like spread from blues to ragtime to pop, and figuring that it still moves people because, like most potent ancient black ballads, it is stark reportage with no moralising. Stagger Lee is not condemned, so he is free to live on in every badass to follow.”—Paul McGrath, MOJO

“[A] probing and prescient and staggeringly well researched study… The historical revelations here are consistently—and insistently—fascinating; the voices brought in as chorus to help Brown vamp into theoretical detour range from Walter Benjamin and Bob Dylan to James Baldwin and Schooly D.”—Ian Penman, The Wire

“Stagolee Shot Billy constitutes a most valuable examination of African American folklore and folkways. It offers extremely well-documented facts and a conscientious scholarly approach, while, like the narrative itself, being highly entertaining.”—David Diallo, Journal of American Folklore

“Stagolee Shot Billy is one of the finest works in the field of cultural studies. Brown provides the reader with a fascinating narrative and an innovative analysis. This book is a must for anyone interested in the intersection of race and popular music in the 20th century.”—Stanley Arnold, Popular Music and Society

“Novelist and professor Brown…delves into the historical and social underpinnings of the Stagolee myth, which has inspired numerous songs and shaped American culture. Tracing the source of the legend, he describes in detail the shooting and killing of bully Billy Lyons by flashy pimp Lee Shelton (a.k.a. Stagolee) for snatching his hat in a St. Louis bar…and Shelton’s subsequent trial and imprisonment. He links the incident to the swirl of corrupt St. Louis politics embodied in violent and warring black social clubs that controlled bootlegging, gambling, and a flourishing prostitution trade… Thoroughly researched, fast moving, and well written, this is the first book to unearth the basis of the Stagolee legend (others mostly deal with its social implications) and will appeal to those interested in understanding American cultural history.”—Dave Szatmary, Library Journal

“Hip-hop scholarship has become an overcrowded industry, yet few have delved into the roots of this international phenomenon. Cecil Brown traces the roots of the black-gangster aesthetic to nineteenth- and early twentieth-century bad-nigger ballads, the most prominent of which was ‘Stagolee.’ This outstanding scholarship is marked by the unique analytical approach that we have come to expect from Cecil Brown.”—Ishmael Reed

“This book sings like the sound beneath the song within the song about the song. Telling it like it ’t - i - is! Like a literary griot (gree-oh!), Cecil Brown transfers this long-enduring African-American song from oral tradition to the printed page. Along the way, he places the song in the context of the times from which it sprang. The amount of artistry the book documents—touching all Americans but focusing on the African-American contribution, or wellspring—is formidable and awe-inspiring.”—Taj Mahal

“An infinitely fascinating exploration of nearly all facets of the Stagolee ballad, the archetype, the countless tales surrounding both, and their passage through time.”—Greil Marcus

“The story which went into the song, and the story of the song, required a big storyteller, willing to train on the fly in lots of disciplines, to do detective work, to make judgments, and to make startling connections. Brown writes learnedly and passionately on Stagolee and political infighting in a very particular St. Louis time and place, as well as on hip-hop and long traditions of what Walter Benjamin called the ‘destructive character.’”—David R. Roediger, University of Illinois