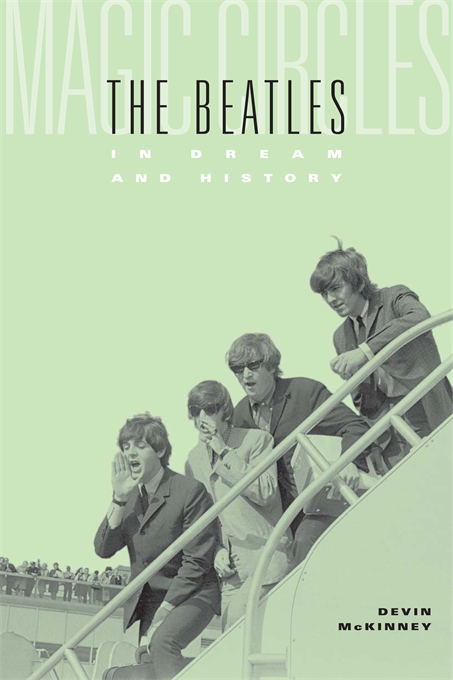 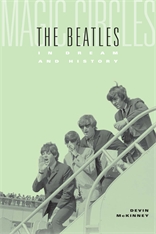 The Beatles in Dream and History

“[An] intelligent study of the Beatles… McKinney crunches the facts and pulps the possibilities before tossing everything into a great metaphysical soup, and his book carries sentences not unlike those Norman Mailer used to write forty years ago in the Village Voice.”—Andrew O’Hagan, New York Review of Books

“McKinney, born in 1966, never experienced the [Beatles] phenomenon firsthand. His perspective grants him freedom to see new combinations, to consider and even dismantle the existing critical apparatus; in doing so, he jolts his subject back to bristling life… If this is a history, it’s a poetic one, driven by smart, breathless connections rather than a need to gather all the facts.”—Ed Park, Village Voice

“With a white-hot prose style and a poet’s instinct for metaphor, independent scholar McKinney exhumes, interrogates, and otherwise energizes the Fab Four in all their musical glory and mythic resonance. Born too late (1966) for phase one Beatlemania, he brings to the job a necessary detachment, a willingness to puncture pieties, and finally a script-flipping thesis: The Beatles were the ’60s. If he gets surprising mileage out of the most lurid artifacts of that collective dream—the butcher cover, the Paul-is-dead rumor—he’s also terrific at maximizing the excitement of a Reeperbahn stand or a mysterious bootleg, and always renders the music in three dimensions.”—Voice Literary Supplement

“From the very first lines of Magic Circles, you know you’re in for a different sort of ride… Devin McKinney’s Magic Circles is as much pop culture comment as it is biography. In either role it’s a fascinating study of a time—and a band—worth remembering.”—January Magazine

“[McKinney] is very good indeed on tracking the Beatles’ collective footprints through the sands of the collective unconscious. He’s a pleasure to read on the Marcos debacle and the ‘butcher’ photograph (in a chapter entitled ‘Meat’): his deconstruction of Help! is little short of masterly… This is the work of a critic bold enough to cite ‘Happiness Is a Warm Gun’ as ‘the defining song of the Beatles’ greatest album.’”—Charles Shaar Murray, Mojo

“You’ll find it hard to resist the urge to leap up and play whatever song [McKinney’s] dissecting; though you may think you’re sick of ‘Happiness Is a Warm Gun,’ Mr. McKinney will convince you otherwise. Any fan under 40 may be a phony Beatlemaniac, but new generations continue to wrap their heads around The White Album, and Magic Circles is a welcome reminder of why that record remains continually fresh.”—Brett Sokol, New York Observer

“Using literary techniques of montage and free association not unlike those found in the Beatles’ more psychedelic songs, McKinney spins a fabulous, fabulist psychic and social history of the band… A detailed, exhaustive and creative look at the Beatles that challenges readers to hear them with new ears.”—Seth Rogovoy, Newsday

“I believe Magic Circles quickly will be recognized as one of a handful of classic rock texts. This is simply a wonderful book, and I mean that quite literally—a book full of wonder. It filled me with the joy of intellectual discovery, challenged hard-set conventional notions I’d long harbored, and perhaps most surprising for a book of this kind, filled me with joy to read: it is a joyous book.”—Kevin Dettmar, Southern Illinois University at Carbondale

“At its core, Magic Circles traces how the Beatles, as working-class musicians who came ‘out of the sticks’ to transform the world by sheer force of will as well as talent, were able to enter the lives of millions of people and get under their skins as well as into their dreams. Thus McKinney argues their music both colonized and liberated their audience’s imagination, laying the psychological foundation for the ecstasies and upheavals of the 1960s: the Beatles are presented as agents of desire combined with rebellion (a heady brew indeed), but who at the height of the ’60s carnival-cum-revolution appeared at least in part as double agents, cover-up artists, traitors to the zeitgeist. These and other contradictions are rendered vividly here. The most original and valuable contribution that Magic Circles makes is as a map of collective sensibility: depicting the Beatles as a white hole in the fabric of official culture, disgorging meanings, fantasies, and mutations for all to share.”—Howard Hampton

“This is the book to read on the Beatles, whether or not you’ve read all the others. It is the critical look the Four have always deserved—clear-eyed, funny, daring, continually surprising, extraordinary in its reach and breadth. Devin McKinney, a generation younger than the Beatles and their core fans, is unburdened by received ideas, and he writes like a dream.”—Luc Sante, author of Low Life

“The Beatles occupy a unique moment in the history of popular entertainment, one in which the relationship between artist and audience undergoes a profound transformation. The Beatles mattered to people in ways that no previous (and few subsequent) popular entertainers have mattered. Sinatra may have inspired devotion, and Elvis mass hysteria, but only the Beatles inspired metaphysical debate.”—Ben Saunders, University of Oregon