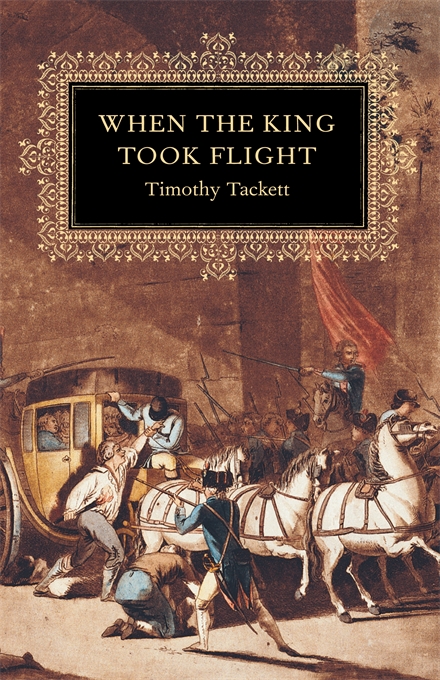 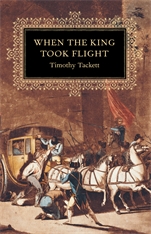 When the King Took Flight

“In a taut, quickly paced narrative, Timothy Tackett tells the captivating story of [the] flight, an event that changed the course of the French Revolution and set in motion an extraordinary chain of actions and reactions.”—The Boston Herald

“In his excellent and well-researched book Timothy Tackett makes the most of the story [of King Louis XVI and Marie-Antoinette’s flight from Paris], neatly broadening it from human melodrama to the stuff of high politics.”—Hazel Mills, The Guardian

“Tim Tackett ably demonstrates [that], in unprecedented detail, [Louis XVI’s flight from Paris to the Varennes in June 1891] also produced a panic akin to the Great Fear of summer 1789 and induced a climate of violence that would worsen in the future, a consequence of contingency rather than of revolutionary ideology. This book is beautifully produced, extremely well written, lavishly illustrated and modestly priced. Tackett has already made some splendid contributions to the study of the revolution and this accessible volume will both enhance his reputation and attract a broad readership… Tackett has conducted a great deal of research in the departmental archives, to show how support for Louis drained away in the provinces as well as Paris.”—Malcolm Crook, History

“For scholars and general readers alike, the French Revolution remains a perennially favorite historical event. And one of the most intriguing as well as pivotal occurrences in the whole revolutionary period took place on the night of June 21, 1791, when ‘something quite extraordinary did happen’ that ‘changed the history of France’… Tackett explores the ramifications of the event on the direction the Revolution subsequently took—namely, toward terror and republicanism. The book’s approachable style, clear ideas, and excellent pacing guarantee general readership interest.”—Brad Hooper, Booklist

“Tackett…describes the failed attempt by Louis XVI and Marie-Antoinette to escape revolutionary France in June 1791, astutely assessing the consequences. Beginning with the climax—the capture of the French king and his party in Varennes (‘not a particularly distinctive town’)—the author then flashes back two years and leads us forward once again to that astonishing moment. Tackett cogently sketches the two principals and displays a fine historian’s eye for engaging detail… Exciting, provocative, instructive: popular history at its finest.”—Kirkus Reviews

“According to Tackett…Louis XVI’s aborted escape from the clutches of revolutionary Paris led to the rise of radical republicanism and the bloody excesses of the Reign of Terror. In many respects, his book is a rebuttal of a prevalent school of thought that views the French Revolution as an abhorrent event from beginning to end… Tackett contends that the political culture of 1789 had placed the revolution on an essentially moderate course and that it was the duplicitous recalcitrance of the king and his network of supporters that unleashed the demons of extremism. Tackett is a lucid writer, and he presents his unique thesis in a scholarly and lively style… Recommended.”—Jim Doyle, Library Journal

“Historian Tackett skillfully shows how Louis XVI’s infamous failed flight from his revolutionary captors in Paris in 1791 led to the eventual victory of radicalism and strengthened those calling for terror to ‘protect’ the revolution from its enemies… [A] dramatic account… Tackett describes the nation’s reaction to the king’s flight and return, not just in Paris but also in the provinces, where widespread fears of foreign invasion immediately followed news of Louis’s escape… Tackett has penned a highly accessible popular history that should appeal to those wanting to learn more about one of the central events of the French Revolution.”—Publishers Weekly

“The royal family’s attempt to flee France in 1791 was one of the defining events of the French Revolution. Timothy Tackett, the most accomplished historian of the Revolution now writing, tells the story of the great flight memorably. The reader will feel that he or she is accompanying the disguised royal family out of the Tuileries in Paris and riding along with them in the big black coach as it falls further and further behind schedule. This is the story, brilliantly told, of how the decision to flee Paris changed the course of the Revolution.”—John Merriman, author of The Stones of Balazuc: A French Village in Time

“Timothy Tackett has written a superb book. Not only is this a spellbinding story well-told, Tackett restores the centrality of Louis XVI to the history of the Revolution and shows how the royal betrayal had incalculable consequences for the monarchy and for the tragedies that lay ahead.”—Donald Sutherland, author of The French Revolution and Empire: The Quest for a Civic Order

“A meticulous work, combining smooth-flowing narrative with cogent analysis. The author thereby demonstrates how far the Revolution had progressed by June 1791, and how the king’s flight helps to explain its subsequent radical and repressive turns.”—Isser Woloch, author of The New Regime: Transformations of the French Civic Order, 1789–1820s