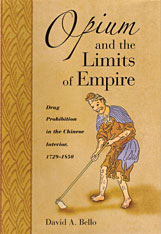 Opium and the Limits of Empire

The British opium trade along China’s seacoast has come to symbolize China’s century-long descent into political and social chaos. In the standard historical narrative, opium is the primary medium through which China encountered the economic, social, and political institutions of the West. Opium, however, was not a Sino–British problem confined to southeastern China. It was, rather, an empire-wide crisis, and its spread among an ethnically diverse populace created regionally and culturally distinct problems of control for the Qing state.

This book examines the crisis from the perspective of Qing prohibition efforts. The author argues that opium prohibition, and not the opium wars, was genuinely imperial in scale and is hence much more representative of the actual drug problem faced by Qing administrators. The study of prohibition also permits a more comprehensive and accurate observation of the economics and criminology of opium. The Qing drug traffic involved the domestic production, distribution, and consumption of opium. A balanced examination of the opium market and state anti-drug policy in terms of prohibition reveals the importance of the empire’s landlocked western frontier regions, which were the domestic production centers, in what has previously been considered an essentially coastal problem.