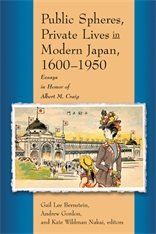 Essays in Honor of Albert Craig

The eleven chapters in this volume explore the process of carving out, in discourse and in practice, the boundaries delineating the state, the civil sphere, and the family in Japan from 1600 to 1950. One of the central themes in the volume is the demarcation of relations between the central political authorities and local communities. The early modern period in Japan is marked by a growing sense of a unified national society, with a long, common history, that existed in a coherent space. The growth of this national community inevitably raised questions about relationships between the imperial government and local groups and interests at the prefectural and village levels. Moves to demarcate divisions between central and local rule in the course of constructing a modern nation contributed to a public discourse that drew on longstanding assumptions about political legitimacy, authority, and responsibility as well as on Western political ideas.