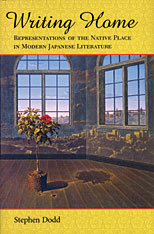 Representations of the Native Place in Modern Japanese Literature

This book examines the development of Japanese literature depicting the native place (furusato) from the mid-Meiji period through the late 1930s as a way of articulating the uprootedness and sense of loss many experienced as Japan modernized. The 1890s witnessed the appearance of fictional works describing a city dweller who returns to his native place, where he reflects on the evils of urban life and the idyllic past of his childhood home. The book concentrates on four authors who typify this trend: Kunikida Doppo, Shimazaki Tōson, Satō Haruo, and Shiga Naoya.

All four writers may be understood as trying to make sense of contemporary Japan. Their works reflect their engagement with the social, intellectual, economic, and technological discourses that created a network of shared experience among people of a similar age. This common experience allows the author to chart how these writers’ works contributed to the general debate over Japanese national identity in this period. By exploring the links between furusato literature and the theme of national identity, he shows that the debate over a common language that might “transparently” express the modern experience helped shape a variety of literary forms used to present the native place as a distinctly Japanese experience.