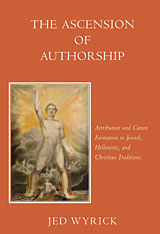 The Ascension of Authorship

Attribution and Canon Formation in Jewish, Hellenistic, and Christian Traditions

The Ascension of Authorship traces the history of the idea of the author in the ancient world, beginning with the attribution practices of Second Temple and Rabbinic Judaism. Jed Wyrick explores the testimony of Josephus on the succession of prophetic scribes and their superiority to Greek historiographers, and interprets the formation of the biblical canon in this light. The Ascension of Authorship also examines the Greek scholarly methodology that questioned traditional connections between names and texts, a methodology perfected by Hellenistic grammarians and inherited by early Christian scholars. Wyrick argues that the fusion of Jewish and Hellenistic approaches toward attribution helped lead to St. Augustine’s reinvention of the writer of scripture as an author whose texts were governed by both divine will and human intent.