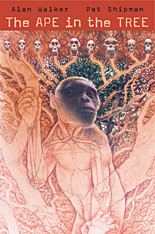 The Ape in the Tree

An Intellectual and Natural History of Proconsul

“Walker’s semi-popular account of this important fossil ape will be an accessible and entertaining read for the educated layman.”—Peter Andrews, Nature

“The Ape in the Tree is a fine account of new ways to puzzle out the behaviors of fossilized animals from odd scraps of bones.”—Robert N. Proctor, Science

“Named after a performing chimp at the Folies-Bergère in Paris, Proconsul is a common ancestor of apes and humans that lived in Africa between 21 million and 14 million years ago. In this memoir, paleontotogists Walker and Shipman splice stories of their adventures excavating the animal with an analysis of its biology—as revealed by current research and by Mary Leakey, who discovered the first Proconsul skull in Kenya in 1948.”—Zach Zorich, Discover

“The Ape in the Tree, by Alan Walker and Pat Shipman, is an engaging chronicle that centers on the discovery and scientific interpretation of one of those early apes [of the Miocene epoch]… The Ape in the Tree combines adventure story with accounts of the painstaking work that underpins scientific progress. It tells of the associated history of scientific thoughts, of their development in the light of new evidence and of their subjection to preconceptions and personal ambition. Authenticity is guaranteed, as one of the authors, Walker, has been involved with the story of Proconsul for some 40 years. His anecdotes convey the excitement of digging up evidence of ancient life and the associated frustrations (‘This is the list of break-downs on a brand-new machine, just for my memory when I talk to the manufacturers…’), unsettling moments (‘When I looked at the belts closely, I realised they were leather strings from which dangled peculiar wrinkled objects: the testicles of the men they had killed. Their stares and their belts made us rather nervous.’), and occasionally dangers (‘Get that plane up fast, Richard (Leakey)!’).”—Christophe Soligo, The Times Higher Education Supplement

“Proconsul is the last common ancestor of humans and apes. Walker and Shipman, American husband-and-wife anthropologists, found 18-million-year-old Proconsul fossils in Africa and then set about to understand them. Their account is part adventure story, part cutting-edge science.”—Rebecca Wigod, The Vancouver Sun

“The authors’ enthusiasm for the topic is contagious, and their ability to transform often-dry paleontological analysis into a potential screenplay for CSI: Kenya is admirable.”—George M. Eberhart, C&RL News

“The Ape in the Tree is an engaging exposition of how fossils are found, excavated, studied, and evaluated. This memoir of great scholarship and high adventure is a must-read for anyone interested in the plight of the paleontologist.”—Donald Johanson, Director of the Institute of Human Origins

“Books about how science is done are usually interesting and The Ape in the Tree is no exception. Alan Walker and Pat Shipman successfully convey the fun of finding old bones without minimizing the hard work and tedium that so often characterize fieldwork.”—Richard Leakey

“Proconsul lays claim to being the best known ape in the fossil record and Alan Walker and Pat Shipman tell the story of this prized fossil superbly well. Wonderfully engaging and insightful, The Ape in the Tree is sure to become a classic in the literature on human origins.”—Roger Lewin, author of Principles of Human Evolution