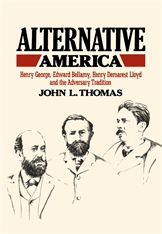 Through vivid and searching portraits of these three redoubtable journalists, prize-winning historian John L. Thomas traces for the first time the evolving ideologies of the most significant reformers of their age.

Henry George’s Progress and Poverty, Edward Bellamy’s Looking Backward, and Henry Lloyd’s Wealth against Commonwealth each in its turn became an international bestseller, championing a course of national policy and social reform that owed allegiance neither to the large-scale capitalist model then emerging, nor to the bureaucratic socialism espoused on the left. Also common to the vast writings of all three were a deep distrust of partisan machine politics and a mounting sense of social crisis which neither spoilsmanship nor materialism seemed able to address.

Seeking instead diversity and cooperation within society, small economic units, and simplicity in government, the authors of these works were moved to defend strikes during the heyday of industrial capitalism. They spoke out for international peace when imperialism was rampant. They called for the preservation of community values in the face of urban sprawl. And they urged the goals of brotherhood and interdependence in an age when survival of the fittest was seen as holy writ.

They failed magnificently as apostles of a radical culture based on the ideal of a community, yet their intellectual legacy was not lost: their heirs include the broad movement that took the name Progressive, the New Deal, and the hopeful crusades of the 1960s. This magnificent book is their memorial and their history.