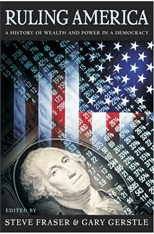 A History of Wealth and Power in a Democracy

Ruling America offers a panoramic history of our country’s ruling elites from the time of the American Revolution to the present. At its heart is the greatest of American paradoxes: How have tiny minorities of the rich and privileged consistently exercised so much power in a nation built on the notion of rule by the people?

In a series of thought-provoking essays, leading scholars of American history examine every epoch in which ruling economic elites have shaped our national experience. They explore how elites came into existence, how they established their dominance over public affairs, and how their rule came to an end. The contributors analyze the elite coalition that led the Revolution and then examine the antebellum planters of the South and the merchant patricians of the North. Later chapters vividly portray the Gilded Age “robber barons,” the great finance capitalists in the age of J. P. Morgan, and the foreign-policy “Establishment” of the post–World War II years. The book concludes with a dissection of the corporate-led counter-revolution against the New Deal characteristic of the Reagan and Bush era.

Rarely in the last half-century has one book afforded such a comprehensive look at the ways elite wealth and power have influenced the American experiment with democracy. At a time when the distribution of wealth and power has never been more unequal, Ruling America is of urgent contemporary relevance.