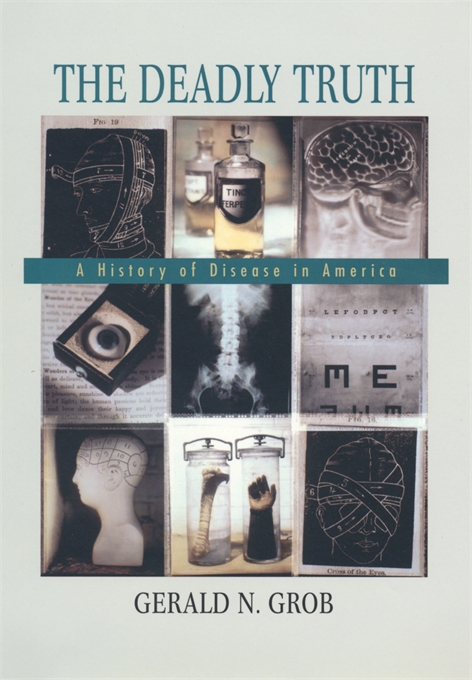 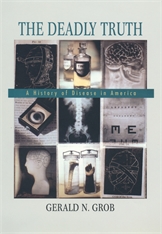 A History of Disease in America

“Grob’s achievement is considerable. He has read and synthesized a massive literature on the social history, demography, and medical and cultural experience of a large country.”—W.F. Bynum, Nature

“A majestic history of disease in America, beginning in its pre-Columbian past, and ending in the post-Aids era… Grob’s analysis is not a pessimistic one, but realistic. He readily charts and salutes the progress made by medical science, less in vanquishing disease than in alleviating its burdens and suffering… It is the assumption that medical progress will eventually eliminate disease altogether that really raises Grob’s scholarly eyebrows… Surveying the present, Grob notes the remarkable changes in health that have occurred during his lifetime… Infant mortality continues to decline. The average lifespan continues to increase, forcing us to redefine the concept of ‘old,’ as we have recently witnessed with the news that the retirement age for public sector workers is to rise by five years.”—Simon Wessely, The Guardian

“The Deadly Truth is in many ways a history of the country itself. Disease has shaped the development of cities, the actions of politicians and even the outcome of wars… [Grob] takes the reader on an exhaustive journey through American history and even American myth.”—Laura Beil, The Dallas Morning News

“At a time when the newly minted world of genes seems to generate a wave of euphoria and unrealistic expectations for long and eventually disease-free human lives, this book attempts to curb such unwarranted optimism… [Gerald Grob] stresses the fact that disease is a natural occurrence shaped within particular time periods and ecological spaces and thus cannot ever be eradicated… Grob has collected in one volume an impressive amount of information about disease patterns and mortality in the United States. His work will be a useful background for future policy makers who must grapple with a new disease ecology shaped by the effects of globalization, significant climate changes, and material affluence.”—Guenter B. Risse, History and Philosophy of the Life Sciences

“[Grob’s] volume offers the past as a guide to the cultural and biological realms where diseases dwell. If policy makers are astute enough to read this volume, there is possibility that Grob’s history can inspire intelligent and measured health care policies… His brush is dipped in the ink of many disciplines and his clear, persuasive prose makes a complicated historical portrait accessible to students and general readers even as he provokes his colleagues to think beyond their own narrow specializations… Grob’s synthesis draws on the best research historians of medicine can offer to trace the patterns of disease across American history. Only a veteran scholar of great talent could offer to students and peers such an engaging work of scholarly breadth and humanity. The messenger is faultless, even if his grim message is that the expectation of boundless health and ever-lengthening life is but a fancy fed by the American utopian dream. Grob in no way discounts the urgency of our continual battle against disease, but he reminds us that sickness and mortality are unavoidable and that we must pay equal heed to dealing effectively with pain and disability and devising human strategies for the end of life.”—Alan M. Kraut, The Journal of the History of Medicine

“Gerald Grob has taken on an enormous challenge and accomplished it superbly. In The Deadly Truth he seeks to chart the history of human and social interactions with disease, death and their responses from pre-Columbian times to the present day. He does this with a command of a huge literature of demographic statistics, medical reports and locates them within a social and cultural context that shows both relative and historical value… The book is academic and scholarly, and a major contribution to the literature.”—Mark Welch, Metapsychology Online

“Grob’s book is a broad study of American medical history and encompasses more than the story of clinicians, surgeons, patients and pathogens. He surveys subjects such as morbidity and mortality related to malnourishment, accident rates, pollution, vague but burdensome disabilities, and more… Grob is critical of the standard interpretations of American medical history… Grob has provided us with a general medical history of the United States of America, with suitable references to trends overseas, especially in Europe. His book will be the standard work on the subject until a decade or two more, when we non-specialists will need our next fresh interpretation of our fascinating medical selves.”—Alfred W. Crosby, Nature Medicine

“Grob adds valuably to a field that has suffered from unsupported opinions and loose reasoning… His later, careful comparisons of changing relations between rural and urban health conditions constitute an especially successful aspect of the book. His accounts of the health effects of industrialization and westward expansion are clear, and his questioning of accepted wisdom is welcome.”—William Beatty, Booklist

“An erudite, thoroughly researched account of how infectious diseases and chronic illnesses have evolved in America, from pre-Columbian times to the present… A wealth of information for students of American history and the history of medicine.”—Kirkus Reviews

“Is it possible to eradicate disease? Grob addresses this question while offering a history of disease in America to illustrate the ongoing relationships among society, environment, and human health. Beginning with evidence from prehistoric skeletal remains and continuing to the present day, Grob demonstrates that disease is a natural part of our existence… Grob provides interesting evidence showing that many diseases were on a decline even before the widespread use of antibiotics.”—Tina Neville, Library Journal

“The Deadly Truth is a fascinating narrative history of diseases that have afflicted Americans for four centuries. Every reader, regardless of background, will discover many new data and insights about diseases and humans. This book will be an authoritative point of departure for a host of thoughtful scientists and scholars.”—John C. Burnham, Ohio State University

“The Deadly Truth is an intellectually exciting and morally sobering account of the role of disease in the history of the Americas. It reminds us of what health care has contributed to better and healthier lives for Americans, but cautions us against the futility of dreams of a disease-free world.”—Leon Eisenberg, Harvard Medical School

“Ambitious and impressive. Grob has drawn upon work from a half-dozen disciplines to shape what might be called a biocultural history of disease in North America; there is no other book quite like it.”—Charles E. Rosenberg, Harvard University

“Coming at a moment when society seems intoxicated by the power of new genetic discoveries, Grob has provided a necessary historical perspective that may aid us in developing a more measured set of expectations and more reasonable social policies.”—David Rosner, co-author of Deceit and Denial: The Deadly Politics of Industrial Pollution

“One of the most distinguished American historians of medicine, Grob gives us an overview of disease from pre-colonial times to the present that is fresh, authoritative and accessibly written. Going against half a century of hype about ‘medical progress,’ he concludes that we really don’t understand why we’re living longer, and that great future breakthroughs in dealing with chronic disease are likely to prove elusive.”—Edward Shorter, author of A History of Psychiatry: From the Era of the Asylum to the Age of Prozac

“A trenchant, thorough and wide-ranging analysis of what we know—and what we still don’t know—about the burdens of disease. This book is a good read: provocative, forceful, and consistently interesting.”—Rosemary A. Stevens, author of American Medicine and the Public Interest