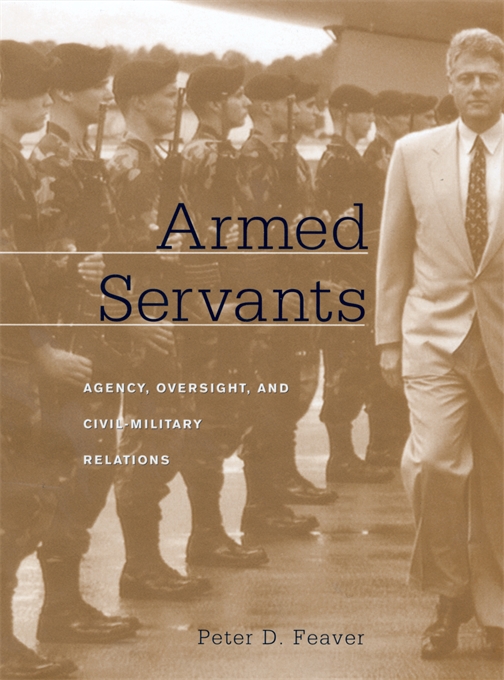 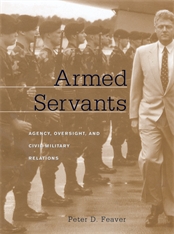 “Peter Feaver’s excellent new book, Armed Servants, sheds much-needed light on civil–military relations in the U.S.; indeed, it may come to supplant Samuel Huntington’s classic 1957 study of American civil–military relations, The Soldier and the State. Armed Servants should be read not only by academic specialists in national security, but also by military professionals—it will change the way they think about these issues.”—Mackubin Thomas Owens, National Review

“The current paradigm of the study of civil–military relations is dominated by some well written and carefully considered works that date from the Cold War… It is interesting to see a new challenge to that paradigm. Feaver has been a rather prolific author, with a number of books and articles on civil–military relations as well as American foreign and defense policies. Armed Servants’ genesis spans his academic career, and it represents a very well synthesized compilation of his earlier works… Feaver has presented a strong challenge to the existing paradigm. He provides a comprehensive review of the dominant civil–military relations theories as well as a well argued counterpoint to those theories.”—Major James R. McKay, Canadian Army Journal

“Feaver’s formulation of the challenge of civil–military relations as being analogous to the problems faced by managers in firms or political appointees in the Federal bureaucracy is not only appropriate. It is a useful corrective to the all-to-common view that civil–military relations are fine if there is no real danger of a coup d’état. Feaver also provides a very rich and nuanced account of Cold War and post–Cold War American civil–military relations, particularly emphasizing how civilian control has changed regarding use of force issues.”—Michael Desch, author of Civilian Control of the Military: The Changing Security Environment

“Peter Feaver advances the study of civil–military relations to a new level of understanding. By dissecting the choices of, and influences on, civilian and military leaders, and interpreting their conduct against the backdrop of a practical theory of political behavior, he unmasks the reality behind the rhetoric of civilian control of the military in the United States. His book will immediately become indispensable not only for students and scholars, but for every military officer, politician, staffer on Capitol Hill, civil servant in the executive branch, and judicial officer in the nation’s court system who participates in national defense.”—Richard Kohn, former Chief of Air Force History, United States Air Force, 1981–1991