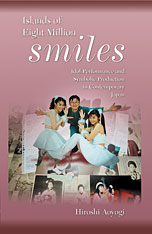 Since the late 1960s a ubiquitous feature of popular culture in Japan has been the “idol,” an attractive young actor, male or female, packaged and promoted as an adolescent role model and exploited by the entertainment, fashion, cosmetic, and publishing industries to market trendy products. This book offers ethnographic case studies regarding the symbolic qualities of idols and how these qualities relate to the conceptualization of selfhood among adolescents in Japan and elsewhere in East Asia. The author explores how the idol-manufacturing industry absorbs young people into its system of production, molds them into marketable personalities, commercializes their images, and contributes to the construction of ideal images of the adolescent self.

Since the relationship between the idols and their consumers is dynamic, the study focuses on the fans of idols as well. Ultimately, Hiroshi Aoyagi argues, idol performances substantiate capitalist values in the urban consumer society of contemporary Japan and East Asia. Regardless of how crude their performances may appear in the eyes of critics, the idols have helped establish the entertainment industry as an agent of public socialization by driving public desires toward the consumption of commoditized fantasies.