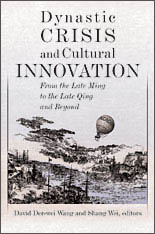 From the Late Ming to the Late Qing and Beyond

This volume addresses cultural and literary transformation in the late Ming (1550–1644) and late Qing (1851–1911) eras. Although conventionally associated with a devastating sociopolitical crisis, each of these periods was also a time when Chinese culture was rejuvenated. Focusing on the twin themes of crisis and innovation, the seventeen chapters in this book aim to illuminate the late Ming and late Qing as eras of literary-cultural innovation during periods of imperial disintegration; to analyze linkages between the two periods and the radical heritage they bequeathed to the modern imagination; and to rethink the “premodernity” of the late Ming and late Qing in the context of the end of the age of modernism.

The chapters touch on a remarkably wide spectrum of works, some never before discussed in English, such as poetry, drama, full-length novels, short stories, tanci narratives, newspaper articles, miscellanies, sketches, familiar essays, and public and private historical accounts. More important, they intersect on issues ranging from testimony about dynastic decline to the negotiation of authorial subjectivity, from the introduction of cultural technology to the renewal of literary convention.