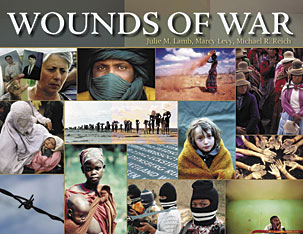 In the last half century, the nature of war has changed dramatically. Wars in the post-Cold War period have occurred mainly within national borders rather than between sovereign states. In these conflicts, civilians are increasingly the deliberate targets of war rather than accidental victims. Women and children in particular have become the intentional targets of murder, rape, and kidnapping. The book focuses on the impact of war on women and girls, and the potential for women as peacemakers. The text addresses major policy issues facing organizations involved in humanitarian assistance, and highlights actions to address and resolve armed violence and conflict.

Wounds of War presents ten country profiles, along with information on eleven key topics related to the impacts of war, including the economies of war, small arms and light weapons, landmines, violence against women and girls, and missing persons.