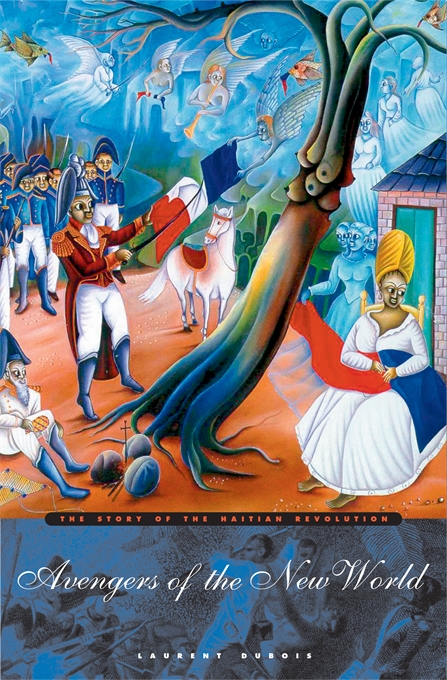 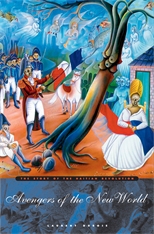 Avengers of the New World

The Story of the Haitian Revolution

“A stern and brilliant new book… The Haitian Revolution, in all its ugliness and brutality, was the response of the oppressed, indentured and enslaved to their unjust condition. And it is this whirling and chaotic world that Dubois so vividly brings to life in Avengers of the New World and so accurately deconstructs… Dubois starts this book about war with chapters about love, death, books and graveyards. His discussions of interracial love affairs and the attitudes of slaves both toward death among slaves and toward death among masters are riveting and eloquent. Indeed, Dubois’ literary sensibility informs the book from start to finish, so that at its beginning as well as its end, the reader feels as if the story must be fiction, yet it is not… Dubois calls Haiti a nation ‘founded on ashes,’ and he has written splendidly about the fires, both political and cultural, that lit up the land during the days of revolution and that are still, in a sense, burning today.”—Amy Wilentz, The Los Angeles Times Book Review

“[A] sinuous and stirring account of ‘the largest slave revolt in the history of the world, and the only one that succeeded.’”—John Leonard, Harper’s

“Laurent Dubois’s patient study offers a valuable glimpse into the complexities of the creation of modern Haiti that supplants the usual commonplaces on this ‘first black republic.’”—Nick Caistor, The Times Literary Supplement

“There are hundreds, perhaps thousands of books about the Haitian Revolution, but only a handful are indispensable. Avengers of the New World joins that select company. A powerful narrative informed by the latest research, it digs beneath ready-made notions—whether of purely heroic rebels or of implacable caste hatreds—to bring to light the forging of new identities and new ideals.”—Robin Blackburn, The Nation

“Avengers of the New World weaves the experiences and stories of slaves, free Blacks, wealthy whites, and French administrators into an unforgettable tale of insurrection, war, heroism, and victory. Laurent Dubois examines the actions of the famous leaders of the revolt such as Toussaint Louverture and Jean-Jacques Dessalines, but also of lesser-known men and women caught up in the violent and tumultuous events. Dubois establishes the Haitian Revolution, which is often misunderstood or forgotten, as a foundational moment in the history of democracy and of human rights… Avengers of the New World can help us put the current situation in Haiti in context, explain the reasons behind the violence, and give us an idea of what the future might hold.”—Caribbean Life

“In this exhaustively researched and valuable account, Laurent Dubois, a history professor at Michigan State, looks back to the founding of Haiti… Dubois, writing in an accessible style and with a wide-ranging focus, has done an impressive job depicting the tumultuous founding of Haiti. Readers wanting to place the Caribbean nation’s current struggles in a larger historical context will find Dubois an eminently worthwhile resource.”—Chuck Leddy, The Christian Science Monitor

“How well Dubois wears the mantle of this exciting area of study. His engaging analysis of the social forces at play in Saint Domingue (now Haiti) at the turn of the nineteenth century reveals this conflict to be of wider significance than we may previously have thought… Dubois’s masterful grasp of the ‘contorted human relationships’ that define the period renders his study infinitely relevant to our global society… With his help, we may yet come to understand the far-reaching impact of this amazing revolution and the true meaning of Haiti’s beloved motto: L’Union fait la force.”—Patti M. Marxsen, French Review

“In Avengers of the New World, Laurent Dubois has crafted a nuanced yet highly readable narrative of the Haitian Revolution… It is a welcome addition to the growing literature on the revolutionary Atlantic World. Readers new to the Haitian Revolution will especially benefit from Dubois’s lucid explanation of an enormously complex period.”—Yvonne Fabella, New West Indian Guide

“This wonderfully readable account is a timely reminder of the perils and sacrifices that marked Haiti’s revolutionary path, resulting in only the second independent nation of this hemisphere. Dubois rightfully emphasizes the impact of French revolutionary principles (i.e., the Rights of Man) on the Haitian rebel slaves, as well as the inextricable influence of French politics on the fate of its Caribbean colony, highlighted by the power struggles between Napoleon and Louverture. The author’s insights about the nature of solidarity, trust, and leadership among the slaves, as well as the organization of insurgents across the colony, are well worth recalling, especially in this fateful year.”—R. M. Delson, Choice

“For those who wish to recall the dramatic events that led to the creation of the world’s first black republic and the Western Hemisphere’s second independent nation, I would strongly recommend Laurent Dubois’s Avengers of the New World… The story of Haitian independence is well known and has been told many times before, but Dubois’s vigorous text brings the story to vibrant new life. The battles, personalities, and complex sociopolitical turmoil brought about in Haiti and elsewhere in the world, especially the slave-owning American South, are recalled with a depth and passion that makes this an invigorating work of historical writing.”—Phil Hall, New York Resident

“Readers unfamiliar with the history of Haiti will find this thoughtful, gracefully written book an eye-opening account of the complexities of the Haitian revolution.”—Milton Berman, Salem Press Online

“What Laurent Dubois has achieved is a synthesis of the most current research in a strikingly accessible and appealing presentation, be it to experts or to general readers unfamiliar with the subject. Avengers of the New World is more than likely to become the new standard work in English on one of the most under-reported events in the history of the Western Hemisphere.”—Madison Smartt Bell, author of All Souls Rising and Master of the Crossroads

“By abolishing slavery and granting citizenship to all men, the Haitian Revolution fulfilled the ideals of the Age of Democratic Revolution in a way that France, the United States, and other nations were not yet ready to accept. Dubois demonstrates the revolutionary determination of enslaved Caribbean- and African-born people and captures the voices of key actors including Toussaint Louverture, individual slaves, free people of color, rival black generals, and white women. This is a story that needs to be told in the engaging yet scholarly voice that Dubois achieves.”—John Garrigus, Professor of History, Jacksonville University

“Brilliantly conceived, beautifully rendered, Laurent Dubois’s narrative places the Haitian Revolution at the center of the Age of Revolutions—one of three that shook the world—challenging in the process the stubborn academic myopia that divides the history of Europe from its colonies, and whites from blacks.”—Thomas Holt, author of The Problem of Race in the 21st Century

“The course of the Haitian Revolution was as checkered as the storyline of an Italian opera. Laurent Dubois wisely and eloquently reduces that complexity to understandable proportions. He shows how the revolutionary leadership evolved over time, both defining its own objectives and winning its battles along the way. With care and good judgment, Dubois builds for us a compelling picture of the emergent consciousness of the slaves. His distinctive contribution is to bring to life one of the most significant events in modern political history, an event that has been deliberately misrepresented for the past two centuries.”—Sidney Mintz, author of Caribbean Transformations and Sweetness and Power

“Avengers of the New World is a luminous model for the history of revolution, for a ‘people’s’ history of freedom, and, not least, for a history that is truly Atlantic in scope. At once original, deeply learned, and gracefully written, Dubois’s achievement is worthy of its great lineage: that of C.L.R. James and Aime Cesaire.”—James C. Scott, author of Domination and the Arts of Resistance and Weapons of the Weak