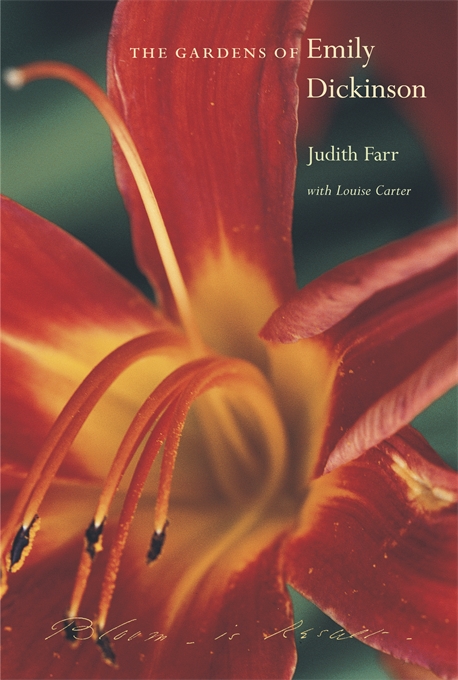 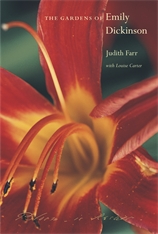 The Gardens of Emily Dickinson

“If you want poetry and gardening of equal merit, turn to Emily Dickinson, whose gardens—poetic and herbaceous—are the subject of an attractive new book, The Gardens of Emily Dickinson, by Judith Farr. It includes a chapter on ‘Gardening with Emily Dickinson’ by Louise Carter. This book catches a constant tension in Dickinson’s life. An interesting, skillful gardener, she had a strong literal regard for the immediate world in which she gardened. And yet the garden in her poems is never just her garden. Nature serves her visionary passion. A dandelion demonstrates how ‘Winter instantly becomes/An infinite Alas.’ I suspect that as she passed among her flowers in Amherst they evaporated into the symbolic ether behind her. And yet, as Farr notes, Emily Dickinson had strong gardener’s hands.”—Verlyn Klinkenborg, The New York Times Book Review

“This is a beautiful book on heavy white paper with rich reproductions of Emily Dickinson’s favorite flowers, including sheets from the herbarium she kept as a young girl. But which came first, the flowers or the poems? So intertwined are Dickinson’s verses with her life in flowers that they seem to be the lens through which she saw the world. In her day (1830–86), many people spoke ‘the language of flowers.’ Judith Farr shows how closely the poet linked certain flowers with her few and beloved friends: jasmine with editor Samuel Bowles, Crown Imperial with Susan Gilbert, heliotrope with Judge Otis Lord and day lilies with her image of herself. The Belle of Amherst, Mass., spent most of her life on 14 acres behind her father’s house on Main Street. Her gardens were full of scented flowers and blossoming trees. She sent notes with nosegays and bouquets to neighbors instead of appearing in the flesh. Flowers were her messengers. Resisting digressions into the world of Dickinson scholarship, Farr stays true to her purpose, even offering a guide to the flowers the poet grew and how to replicate her gardens.”—Susan Salter Reynolds, The Los Angeles Times

“The reclusive poet’s garden, conservatory and the nearby woods were intimate theaters, entwined with her identity, requisite to her survival and her primary inspiration. Plants and flowers had souls and spoke to her; their lives and deaths were mystical events. In them, she found metaphors for beauty, truth, heaven and earth, and she wove them into poems she called ‘blossoms of the Brain.’ Dickinson scholar Judith Farr unravels the symbolism in Dickinson’s spare sensuous poetry and explores the influences of family, friends and Victorian culture on her work. The final chapter, by horticulturalist Louise Carter, describes plants surely and most likely grown by Dickinson, along with their care. (She loved heavily scented flowers and described herself as a ‘Lunatic on Bulbs.’) An engrossing read, illustrated with paintings, photographs and other images from the era.”—Lili Singer, The Los Angeles Times

“For the serious Dickinson lover, get The Gardens of Emily Dickinson by Judith Farr, an engrossing and serious biography with deep analysis of the floral themes in the poems.”—Carol Stocker, The Boston Globe

“In this first major study of our beloved poet Dickinson’s devotion to gardening, Farr shows us that like poetry, gardening was her daily passion, her spiritual sustenance, and her literary inspiration… Rather than speaking generally about Dickinson’s gardening habits, as other articles on the subject have done, Farr immerses the reader in a stimulating and detailed discussion of the flowers Dickinson grew, collected, and eulogized… The result is an intimate study of Dickinson that invites readers to imagine the floral landscapes that she saw, both in and out of doors, and to re-create those landscapes by growing the same flowers (the final chapter is chock-full of practical gardening tips).”—Maria Kochis, Library Journal

“Farr…shows that Dickinson’s use of flower imagery drew on first-hand experience in the garden and conservatory. She was a passionate gardener, ‘able to envision every season and flower at will,’ Farr writes, her gardening, like her poetry, ‘the manifestation of profound and even occasionally rebellious desire.’ …For bringing us so close to Emily Dickinson—one can almost hear her breathing—The Gardens of Emily Dickinson deserves wide readership.”—Tom D’Evelyn, The Providence Journal

“Farr claims Dickinson was better known in her lifetime as a skilled gardener than as a poet. She grew native plants and more exotic imports, and she botanised in the woodlands and pastures surrounding her home. This is, of course, no news to Dickinson scholars, but the point cannot be stressed too often. Farr makes it emphatically by bringing together a wealth of material about Dickinson’s engagement with flowers. Her book, which is full of close readings, is likely to become the standard work on the subject. As Farr shows, Dickinson’s gardening and writing were intertwined enterprises, which both required a great deal of care.”—Madeleine Minson, The Times Higher Education Supplement