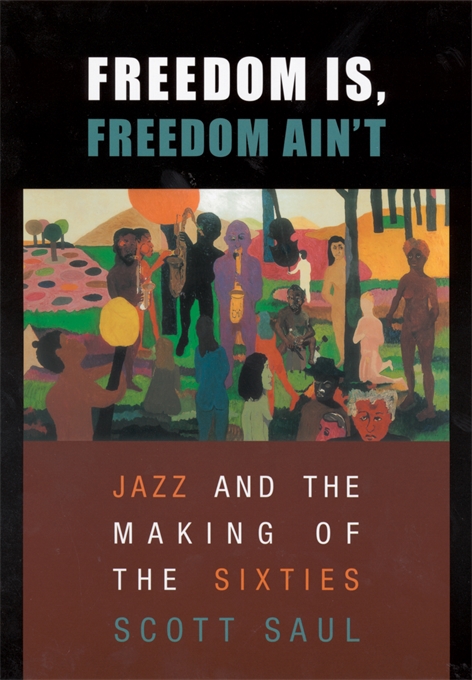 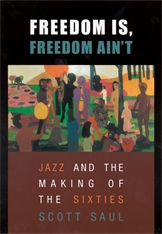 Jazz and the Making of the Sixties

“These days jazz seems so marginalized that it’s bracing to read a book that shows so clearly how and why jazz is relevant to larger social, political, and cultural issues… [Saul’s] analysis of the 1960 riot at the Newport Jazz Festival and the different ways jazz critics, social commentators, and black intellectuals and artists—including poet Langston Hughes and bassist Charles Mingus—reacted to it, is some of the most insightful writing on the tensions between consumer culture and jazz culture, and the black–white racial divide that I’ve ever read. Saul also maps out the connections that artists and critics saw between the progressive politics of the civil rights and Black Power movements and avant-garde music… This book is essential reading for anyone interested in the wider cultural and political issues that have affected jazz in the past 50 years.”—Ed Hazell, Signal to Noise

“Saul has written a wise and trenchant study of a complex period in American culture. Heavy on detail and accurate musical analysis, Freedom Is, Freedom Ain’t is a welcome antidote to the absurdist dialectics of writers such as Frank Kofsky, who co-opted Coltrane to the black nationalist cause, and to those who promote or condemn jazz modernism without understanding its wider context. Unusually, it is a book about the sociology of music that lets the music breathe as well. Readers familiar with Mingus’s Black Saint and the Sinner Lady or Max Roach’s deceptively complex We Insist!: Freedom Now Suite will return to the music with fresh understanding. Those who have not previously encountered these classic records and who think vaguely of John Coltrane’s A Love Supreme as the iconic moment in 1960s jazz will find their listening as well as their thinking subtly but emphatically shifted.”—Brian Morton, The Times Higher Education Supplement

“Documenting the ascendance of hard bop and soul-jazz as currencies of cool for hipsters both black and white nearly a half-century ago, Scott Saul provides a rich contextual history of the epochal Newport Jazz Festival as well as focused examinations of jazz artists who came of age during this colorful era… Saul describes an interface of music and lifestyle that paralleled the rise of black activism. He surveys a tumultuous clash of art, commerce, politics and race with a keen eye, depicting various jazz heroes and their organized contributions as well as the slow evolution of cool, Saul even finds comparisons between the social impact of John Coltrane and Malcolm X… Above all, Freedom Is, Freedom Ain’t illuminates the vital relationship between black music and urban culture.”—Mitch Myers, High Times

“Saul…shows in very specific detail that the music that most accurately mirrors the Civil Rights movement of the 1960s is jazz—specifically hard bop. [He]…has attempted a major task: placing jazz in the larger cultural and political context of the late 1950s and early 1960s… Saul…bravely goes where no historian has gone before in tying musicological specifics to larger political points.”—Will Friedwald, The New York Sun

“Scott Saul’s subject is the explosion of revolutionary jazz in the 1950s and 1960s driven by an engagement with the Black Power movement and the anti-suburban hipster counterculture. The principal musicians he explores are figures like Charles Mingus, John Coltrane and Max Roach, but he bucks the biographical norm by placing the music within the wider intellectual milieu of writers, critics and visual artists that instinctively felt the urgency of jazz, even if some responded in a wrongfooted way… Tension between individualism and the safety net of mass culture is the prevailing theme of this original and thought-provoking piece of writing.”—Philip Clark, The Wire

“Scott Saul’s Freedom Is, Freedom Ain’t is that rarity in academic studies: a book one is tempted to read a second time purely for pleasure. Saul writes with a musician’s working knowledge of craft and a cultural journalist’s narrative and stylistic panache. Loosely organized around a history of jazz from ‘Birth of the Cool’ through the apotheosis of free jazz… Freedom Is devotes equal attention to jazz stylistics, politics, audiences, and resonances in the literary and visual arts.”—Adam Gussow, American Literature

“This book is provocative and engaging, and it draws enlightening connections that will help answer further questions both about jazz and American culture in the 1960s.”—Gabriel Solis, Belles Lettres

“Along with the saxophonist John Coltrane, the mercurial bassist-composer-bandleader [Charles] Mingus is at the heart of Scott Saul’s meditation on jazz and the civil rights movement. Saul wants us to understand hard bop and other jazz-inspired artistic forms as participating in the same modes of political thought as the black freedom movement… The dynamics and aesthetics of the music shed light on the era’s politics, while African American politics helps us grasp the musical affiliations and creative choices of artists… Saul draws some previously unnoticed connections between youth culture and the very adult world of hard bop, particularly the influence of jazz festivals on the white counterculture… Saul is consistently engaging, his interpretations and prose often as energized as his subjects.”—David W. Stowe, Journal of American History

“A powerful story about how African American musicians and artists expressed the hope, pain, exhilaration, determination, and loss people felt in the midst of a revolution… A truly original contribution that will force us to rethink the relationship between the black freedom movement and American culture in the volatile 1960s.”—Robin D. G. Kelley, author of Freedom Dreams: The Black Radical Imagination

“With an incredible gift for helping you hear the surprising sounds he studies, Scott Saul brilliantly shows how the new music of hard bop in the 1950s and 60s amounted to a new stance toward the world—a kind of ‘direct action’ in musical form whose liberatory charisma tore through the U.S. cultural and social caste system. A truly great work of U.S. cultural studies.”—Eric Lott, author of Love and Theft: Blackface Minstrelsy and the American Working Class

“Saul’s attunement to the way figures like Robert Thompson, James Baldwin, Mezz Mezzrow, Norman Mailer, John Coltrane, and Charles Mingus shape and are shaped by the realities and fantasies of blackness makes possible a richer and more accurate understanding of the politics of post-war American culture. As such, Saul’s book is a wonderful accomplishment.”—Fred Moten, author of In the Break: The Aesthetics of the Black Radical Tradition

“The prose is clear, supple, and witty. It is always engaging, even entertaining; and Saul shifts effortlessly between serious musical analysis and historical narration, presenting both with a deft touch.”—David Lionel Smith, author of Civil Rites

“Scott Saul begins with the belief that a nation’s history can be found in its art, and he demonstrates that a country’s principles and struggles can truly be felt in its art. Freedom Is, Freedom Ain’t offers more than simply a thoroughly-drawn thesis, it is also a story of the ideas and visionaries—a diverse cast of thinkers and dreamers and activists—who shook up American politics and culture. We’ve been living in the aftershock ever since—whether we know it or not—and Scott Saul explores the rubble. He delves and reveals, finding the roots of today’s pop culture issues in the boldest principles and performances of the past. It’s a fascinating account, plus Saul’s sense of cultural justice presents an inspiring lesson to future historians and art-lovers.”—Armond White, author of Rebel for the Hell of It: The Life of Tupac Shakur and The Resistance: Ten Years of Pop Culture that Shook the World