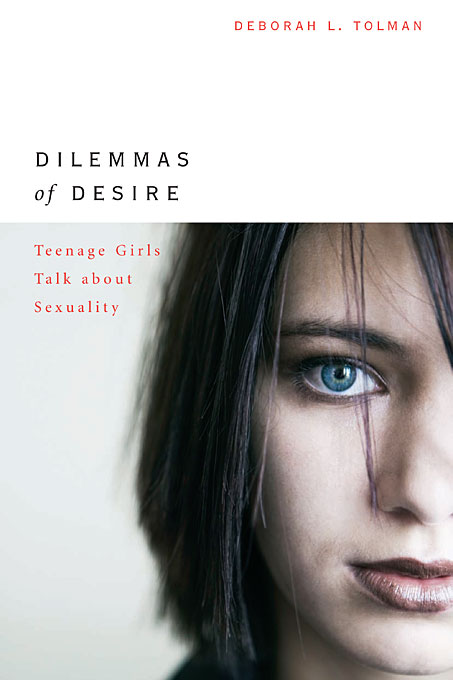 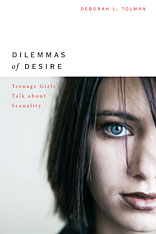 “Bombarded by conflicting social messages—sexy but not sexual; open but not slutty—it’s no wonder teenage girls are often confused by sexuality. Tolman, an expert on sex and gender, offers an analysis of that confusion, the dangers involved, and what sorts of changes might help arrest this trend.”—The Globe and Mail

“‘Girls are the objects of boys’ sexual desires and have no desires of their own.’ In this provocative study, Tolman…turns this notion upside down. Basing her research on extensive interviews with both suburban and urban teens, Tolman investigates how young women’s first sexual experiences may be influenced by societal pressure to dissociate from their own bodies and desires… Tolman shows the chilling dangers—for individuals and society—when girls are afraid to take ownership of their sexuality… And she offers ideas for how change can happen… Parents and teachers alike will find much to contemplate and borrow from in this fascinating account.”—Gillian Engberg, Booklist

“Tolman bases this qualitative study of teenage sexuality on what she calls the ‘listening guide’ method of research (a method she helped pioneer), in which she records interviews on various topics and then reads through them several times looking for different themes. She drew her sample of 31 girls from high school juniors in two different settings, one urban and one suburban… Though reluctant to be honest about their sexuality in a group setting, in part because of potential gossip, the girls discussed their feelings with Tolman in a one-on-one setting. The quandaries the girls face—whether they assert, embrace, or dismiss sexual desire—is Tolman’s theme. Though the girls told her they felt sexual desire, they at first often denied it. They fear getting pregnant or being labeled as sexually promiscuous… The book is a powerful tool in the struggle for improved sexuality education, since even the most sophisticated of girls seem to lack basic kinds of information.”—V. L. Bullough, Choice

“For all the panicky ink devoted to teen sex, until now there has been no academic study on what teenage girls actually want. Tolman…fills that gap by focusing on girls’ desires, rather than on the social ills they’re usually quizzed on… The teenage voices she has collected are articulate and refreshing… [Tolman] makes a convincing case for why we should listen: girls in touch with their own desires make safer, healthier choices about sex.”—Publishers Weekly

“Dilemmas of Desire challenges one of our most fundamental beliefs about adolescent sexual activity—that it causes problems, especially for young women, and ought to be prevented. In this nuanced and insightful book, based on extended interviews, Deborah Tolman argues that it is the failure to recognize the reality of female sexual desire that is at the heart of the ‘problem.’ Challenging both some deeply held assumptions and social policies, the book is bound to stimulate debate.”—John DeLamater, Professor of Sociology, University of Wisconsin–Madison

“It’s rare that there’s a national debate in which public opinion and social science are so clearly on the same (and losing) side. Eighty percent of parents want comprehensive sexuality education in the schools; most social science points to the positive impact of full sexuality education on public health and family and community well being. And yet, in this nation, a relatively small band of ideologues prevails over the real wishes of the public. Dilemmas of Desire is a powerful tool in the struggle for sexuality education and improved sexual health for young women (and young men too), published at just the right time.”—Michelle Fine, author of The Unknown City: Lives of Poor and Working-Class Young Adults

“What fascinated me in Deborah Tolman’s research was her discovery of how much girls have to say about what they say they can’t talk about. Taking the bold step of asking girls about their own experiences of sexual desire, Tolman asks us to consider the quandaries girls face when they feel desire, and act on it, and also when they do not. Dilemmas of Desire is a pathbreaking book, opening new conversations about girls, boys, and what it means to be human.”—Carol Gilligan, author of In a Different Voice: Psychological Theory and Women’s Development

“In the constant din of pseudoscientific claims about sex, arrogant punditry, and moralizing fear-mongering, the voices consistently missing are those of teenagers, and especially teenage girls. By listening carefully to these girls as they navigate their own sexual desires, balancing agency and ambivalence, Deborah Tolman dramatically enlarges and enriches the conversation we should be having about sex and sexuality.”—Michael Kimmel, Professor of Sociology, SUNY Stony Brook, author of Manhood in America

“Listening to and appreciating the depth of girls’ desire—complex, powerful, sometimes pleasure-seeking, sometimes afraid—is indeed revolutionary. Deborah Tolman has done it, with sensitivity and honesty, and that makes Dilemmas of Desire a gift to adolescent girls and adult women as well. By inviting girls to tell us about their experience of aliveness in their bodies and their longing for connection, Tolman invites all of us to reexamine our sexual stories, and better understand our own sexualities.”—Judith V. Jordan, Wellesley Centers for Women

“Girls feel sexual desire. Simply asserting that would be revolutionary. But Dilemmas of Desire goes much further, allowing girls to explain their sexuality from their own perspectives: how they deny it, assert it, are cut off from it, embrace it. Tolman’s work is essential to a true understanding of female adolescence.”—Peggy Orenstein, author of Schoolgirls: Young Women, Self-Esteem, and the Confidence Gap