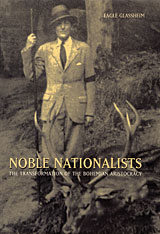 The Transformation of the Bohemian Aristocracy

This illuminating study examines the dramatic transformation of Bohemian noble identity from the rise of mass politics in the late nineteenth century to the descent of the Iron Curtain after World War II.

At the turn of the twentieth century, some 300 noble families owned over a third of the Habsburg Bohemian Crownlands. With the Empire’s demise in 1918, the once powerful Bohemian nobility quickly became a target of the nationalist revolution sweeping the new Czechoslovak state. Eagle Glassheim traces the evolving efforts of the nobles to define their place in this revolutionary new order.

Nobles saw little choice but to ally with Czech and German national parties, initially in the hopes of assuaging radical land reform. Yet they retained aristocratic political and social traditions that continued to shape their national identities after 1918. Some moved toward a hybrid national identification, embracing a form of German internationalism and a vision of pan-European unity that led many to support Hitler’s expansionist efforts in the late 1930s. Others trumpeted their newfound Czech nationalism in resisting the Nazi occupation.

Noble Nationalists offers valuable insights on the nationalization of a conservative political elite, as well as on the national and social revolutions that recast Central Europe in the first half of the twentieth century.