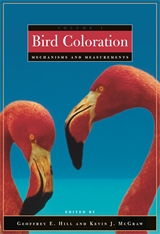 “The aim of Bird Coloration is to provide a flavour of the extent to which birds have exploited the sun’s rays… These two volumes also delve deeper into the disparate ways in which bird colours are produced, what purpose they perform, their effect on communities in general, and finally, how they got here in the first place—their evolution… The reference lists alone are priceless… Bird Coloration will appeal to students of, and researchers in, evolution in general, because the devices that cause colour are often considered as phenotypes. Those interested in ecology, animal behaviour and vision studies will benefit, too… And if further incentive is needed to buy these books, just flick through the colour sections.”—Andrew R. Parker, The Times Literary Supplement

“The two volumes of Bird Coloration provide an excellent up-to-date overview of the topic… Bird coloration is a huge topic and anyone organizing an overview should be heartily congratulated.”—Andrew T. D. Bennett, Nature

“This anthology of scientific writing in two volumes explains much of what is known about bird coloration and highlights that which we do not know. Subjects like whether the bright coloration of a male Northern Cardinal increases or decreases its chances of being captured by a visual predator like the Cooper’s Hawk are debated… Many of the contributions to this text are scientifically detailed, however, the fascinating subject of bird coloration is presented at a level that the average reader would learn much about this fascinating subject.”—Robert Hoopes, Wildlife Activist

“Together, these two volumes present an outstanding collection of contributions, written by leaders in the field and offering a modern, state-of-the-art review of our understanding of bird coloration—including the mechanisms, function, and evolution underlying the variation we see today.”—Michael S. Webster, Washington State University