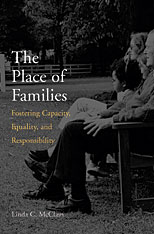 The Place of Families

In this bold new book, Linda McClain offers a liberal and feminist theory of the relationships between family life and politics—a topic dominated by conservative thinkers. McClain agrees that stable family lives are vital to forming persons into capable, responsible, self-governing citizens. But what are the public values at stake when we think about families, and what sorts of families should government recognize and promote?

Arguing that family life helps create the virtues and character required for citizenship, McClain shows that the connection between family self-government and democratic self-government does not require the deep-laid gender inequality that has historically accompanied it. Examining controversial issues in family law and policy—among them, the governmental promotion of heterosexual marriage and the denial of marriage to same-sex couples, the regulation of family life through welfare policy, and constitutional rights to reproductive freedom—McClain argues for a political theory of the family that embraces equality, defends rights as facilitating responsibility, and supports families in ways that respect men’s and women’s capacities for self-government.