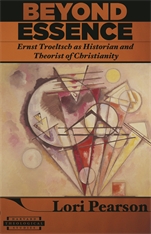 Ernst Troeltsch as Historian and Theorist of Christianity

Lori Pearson argues that as a result of his historical work, Troeltsch moved beyond the category of essence and sought new ways of theorizing Christian identity in the context of modernity’s pluralistic yet fragmented society.