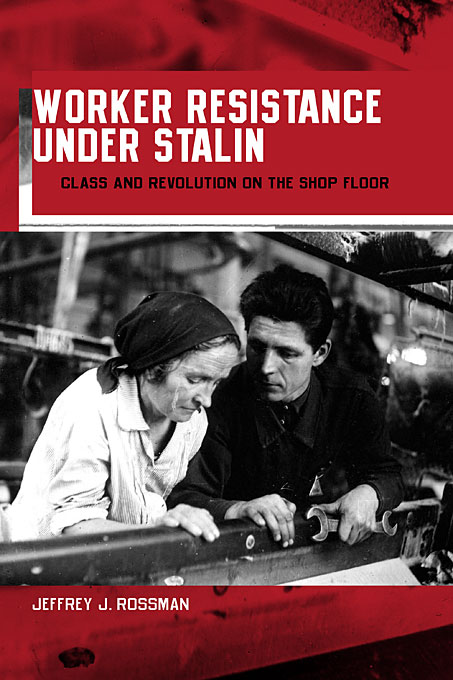 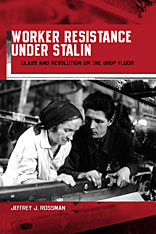 Class and Revolution on the Shop Floor

“Jeffrey Rossman’s well researched and passionately written book on the resistance of the textile workers to Stalin’s industrialization contributes to a number of issues that are the subject of heated debate in the historiography of Stalinism: the mechanisms of a genesis of social resistance to the regime, its extent, effects, dimensions and limits, and the process and sources of the construction of identities. The book explores, among other major issues, the evolution of forms of worker protest; the emergence of patterns of resistance; the impact of workers’s struggle on central power policies; the reasons for the failure of shopfloor resistance; the divisions between the workers caused by resistance; the role of a worker leader; and the degree of the (un)development of a political consciousness among workers, to name just a few… Rossman’s thorough research in the regional and central archives of Russia has produced a wonderful result—a vivid, intense, colourful and complex story of the worker struggle not just for bread but also for the preservation of the shopfloor democracy and self preservation of the working class as a political group.”—Elena A. Osokina, International Review of Social History

“This meticulously researched and clearly argued account of industrial relations during First Five-Year Plan emphasizes workers’ own actions and sentiments and is therefore a refreshing addition to a field that has declined so markedly over the last decade. Jeffrey Rossman’s Worker Resistance under Stalin challenges the largely pre-archival ‘revisionist’ historiography that claimed proletarian support for Stalin’s revolution… The power of this volume lies in its superb research and captivating narrative. Rossman worked extensively in eight archives (with citations from 160 files) but it is not so much the quantity of the research as its quality that is so impressive… A groundbreaking contribution to the field. Rossman has single-handedly destroyed the myth that it was impossible for workers to resist Stalin. He has also allowed workers’ own voices to refute the absurd notion that they welcomed such brutal policies and supported Stalinism. Worker Resistance under Stalin provides the essential comparative baseline for understanding why the generalized working-class anger did not escalate into rebellion.”—Kevin Murphy, Revolutionary Russia

“From roughly 1928 to 1932 the Ivanovo Industrial Region (IIR) became the epicenter of worker resistance to Stalin’s ‘revolution from above.’ In this powerful and highly original study, Jeffrey Rossman narrates how the region’s textile workers responded to Stalin’s crash industrialization program with strikes, slowdowns, sabotage, and demonstrations, culminating in April 1932 in an ‘uprising’ in Vichuga, when 17,500 strikers attacked the headquarters of the police, OGPU, and party, which resulted in two deaths and a couple of dozen injuries. On the basis of exhaustive work in local and national archives, including the regional archives of the Federal State Security Service, Rossman reconstructs with exemplary acuity the impact of intensified workloads, wage arrears, shutdowns, and the deterioration of equipment upon the lives of IIR textile workers… A fine study that vindicates the importance of ‘resistance’ as a category for understanding Soviet realities against certain recent efforts to deny its very possibility.”—S.A. Smith, Russian Review

“This outstanding work challenges many of the more paradigmatic interpretations of the relationship between the Stalinist leadership and its working class. Worker Resistance under Stalin will make a major statement and provoke some much needed controversy around this question.”—Donald Filtzer, University of East London