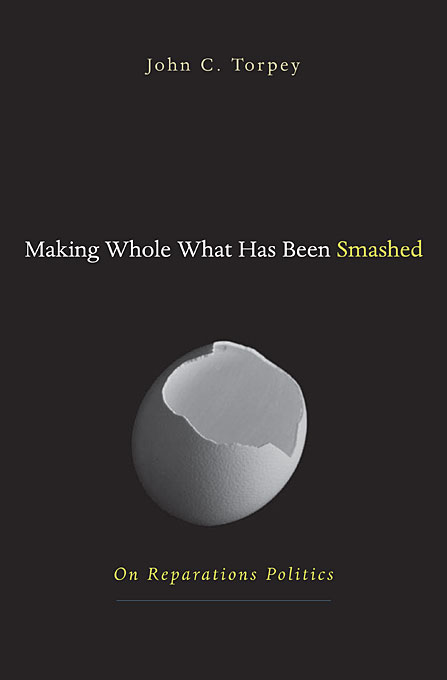 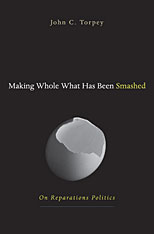 “The Age of Apology came to a head with 1990s contrition chic… History is written by the winners, it is commonly said. But heritage—history shaped to present purposes—is increasingly fashioned by the losers. Ex-colonial peoples, minorities, tribal indigenes everywhere demand reparations—atonement for the suffering of those deprived of autonomy and agency, repatriation of treasures purloined or pillaged or purchased, compensation for past injustices… Among millions maltreated by history, John Torpey notes, an unseemly contest for the status of worst-victimized often ensues. Torpey’s short and scintillating book, Making Whole What Has Been Smashed, explores reparation demands ranging from official apologies and admissions of wrongdoing to memorials, cash payments, health and welfare aid, and property return to groups and individuals. Chapters on post-apartheid Namibia and South Africa, on Japanese-American and Japanese-Canadian Second World War internees, and on legacies of slavery that still disable African Americans suggest his topical scope. But the book’s greatest merit is its profound and lucid critique of the causes and political, legal, economic, and symbolic implications of reparation claims. Compassionate erudition, deft demolition of holier-than-thou posturing, and clarity of expression make this a minor classic reminiscent of Paul Bator’s 1983 The International Trade in Art. Torpey rightly links current campaigns to redress wrongs with the broader trend, consequent on widespread public pessimism, refocusing attention from the future to the past.”—David Lowenthal, The Times Literary Supplement

“Anyone interested in the history, politics, sociology or philosophy of reparations should read John Torpey’s brilliant analysis of global reparations politics. Torpey uses a superb blend of historical sociology and philosophy to offer his readers an informed, skeptical, yet not entirely unsympathetic look at the reparations movement.”—Rhonda E. Howard-Hassmann, Canadian Journal of Sociology Online

“After reading this book, I am struck with the question of to whom to give reparations for the past injustices. In a country where the victims of abuses do not live, and persons or groups who ask for reparations are not merely the descendant of the victims, is it evenhanded to give reparations? Torpey puts forth this quandary in exemplifying the case of reparations for Black Americans, Japanese-Americans and Japanese-Canadians. This analysis of trans-generational justice is one of the precious contributions of this book that all researchers of transitional justice as well as students of political science, sociology, history and philosophy must consider. His invaluable analysis of the reparations movements, drawn from an interdisciplinary perspective, calls to a wide range of readers.”—Aysegul Keskin, International Journal of World Peace

“Torpey’s book, both theoretical and empirical in its analysis, is unquestionably the most clear-headed work available on the several international campaigns to redress past injustices. Keenly insightful and analytical, Torpey is no polemicist favoring or opposing reparations. Rather, he is a smart social scientist who unravels the persistent human concern of reckoning with the past and righting history’s wrongs.”—John David Smith, North Carolina Historical Review

“Making Whole What Has Been Smashed: On Reparations Politics is comprehensive, thoughtful, and almost compulsively readable. John Torpey’s willingness to query the unquestioned pieties of our era’s therapeutic politics is a tribute to the rigorousness of his approach. The tone of the work is consistently cool, analytical, and tactfully skeptical, no small achievement given the highly charged nature of these debates.”—Michael Brown, Williams College, author of Who Owns Native Culture?

“‘When the future collapses, the past rushes in.’ With this formidable insight, John Torpey launches his penetrating study of the many varieties of reparations politics around the world. In exemplary fashion, Torpey clarifies what is at stake in a global movement seeking recompense and apology for the past’s insulted and injured in an era inhospitable to ideals for future reconstruction. This reflective work is a splendid starting point for thinking through not only reparation ideas but some of the other large quandaries of reform thought today.”—Todd Gitlin, Columbia University, author of The Intellectuals and the Flag

“Why do we so regularly hear admonishments to ‘come to terms with the past?’ In reply, John Torpey identifies momentous trends in a splendid, far-ranging inquiry: the collapse of transformative politics and the end of the Cold War, the emergence of the Holocaust as a template for the rectification of historic wrongs, the mobilization of the historically victimized, and the mix of human rights commitments with the juridification of politics. Critical, yet balanced and humane, Torpey presents a savvy, deeply-informed analysis that should be contemplated by all who seek a better global future. I couldn’t recommend him more enthusiastically.”—Michael R. Marrus, University of Toronto, author of The Holocaust in History