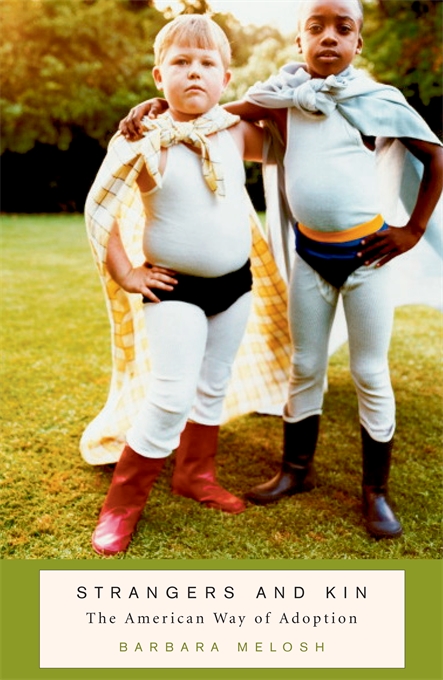 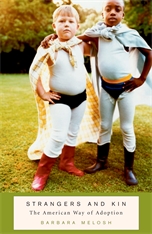 The American Way of Adoption

“Melosh argues that a brief, post-World War II acceptance of adoption has given way to skepticism—even fear—about embracing outsiders as part of the family. She attempts to explain why in Strangers and Kin… Melosh’s book reveals a persistent American ambivalence about the difference of families formed by law, not blood.”—Jennifer K. Ruark, The Chronicle of Higher Education

“Melosh has applied her sharp analytical skills to an archival treasure, the papers of the Children’s Bureau of Delaware, a child welfare agency established in 1918. Drawing on narratives contained in these records, she has crafted a nuanced history with a lively forward momentum.”—Cheri Register, Ruminator Review

“Barbara Melosh, an adoptive parent, has crafted a very well-written, occasionally elegant, polemic in the interest of adoption as the best solution to certain nebulously defined social problems, including inadequate social provision and infertility… Strangers and Kin effectively demonstrates that ideas about adoption have changed over time, for example, ideas (and resulting practices) regarding the importance or irrelevance of matching children to their adoptive families and the shamefulness or not of infertility and so-called illegitimacy, conditions that have been intimately connected with the rise and fall of child adoption at particular historical moments. Even ideas changed, though, Melosh shows that adoptive parents, especially, have continually had to contend with questions about the normality or abnormality of adoption-constructed families… Melosh is a good writer and a strong strategic analyst.”—Rickie Sollinger, Journal of American History

“Despite their far greater visibility, adoptive families are less common in the US now than they were in the 1950s. In Strangers and Kin, Barbara Melosh tells us why, simultaneously tracing the transformation of adoption over the past century and exploring how it has served as a charged site of American notions of identity, motherhood, family, and nation… Melosh eloquently reveals how in the twentieth-century United States, the practice of turning strangers into kin ‘became familiar, and how it remains strange’ even today… It is both a fascinating cultural history of twentieth-century adoption in the US and a deeply informed study of what it reveals about the shifting concepts of family, identity and the limits of American pluralism… [Melosh’s] reasoned, assiduously researched and carefully argued analysis is as thoughtful as readers are likely to find. She is sensitive to her multiple historical subjects as well as to her differently situated readers.”—Sherri Broder, Women’s Review of Books

“Adoption is a quintessentially American institution, says…Barbara Melosh, in that it embodies optimism, generosity of spirit and confidence in ‘social engineering.’ In Strangers and Kin, Melosh offers a history of adoption from the early 20th century to today. Drawing on records of adoptions and individual stories, she presents thoughtful comments on current debates surrounding adoption, including transracial adoption and the ethics of international adoption.”—Publishers Weekly

“Strangers and Kin combines history, popular culture and deft political analysis to tell a fascinating story of adoption’s changing face in our society. Melosh shows how adoption policy reflects and illuminates our understanding of family and community, biology and race, self and other. She provides a thoughtful, sensitive, and deeply informed rejection of the new orthodoxy of adoption, and an embrace of adoption’s positive potential.”—Elizabeth Bartholet, author of Nobody’s Children: Abuse and Neglect, Foster Drift, and the Adoption Alternative

“Melosh’s brilliant study helps us to understand the ways in which the combined forces of a resurgent sociobiology, cost–benefit market models, and idealized images of natural motherhood have cast adoption into the shadows. We have become a society less generous in opening our homes to strangers who then become kin. Melosh helps us to understand why. Strangers and Kin supersedes all other books on this vital and fraught topic.”—Jean Bethke Elshtain, author of Jane Addams and the Dream of American Democracy

“Finally we have a history of adoption that is sensitive to all parties. Based on meticulous archival research, Barbara Melosh’s superb book tells modern adoption’s complicated and surprising story in a lucid, comprehensive manner, laying to rest many old misconceptions but also raising new questions anyone involved with adoption on the personal or policy level must confront.”—John Gillis, author of A World of Their Own Making: Myth, Ritual, and the Quest for Family Values

“Gracefully written and brimming with insight, Strangers and Kin tells a story about child adoption during the twentieth century that is as little known as it is significant. With a stunning array of original sources, Melosh provocatively suggests that birth mothers and adoptive parents have been well ahead of policy-makers and professionals in influencing adoption practices and enhancing the reputation and visibility of adoption. Although it has touched only a tiny minority of children and adults, adoption symbolizes the historic American conversation about identity, difference, and solidarity. Anyone interested in belonging—to families, communities, and country—will learn a great deal from this book.”—Ellen Herman, author of The Romance of American Psychology: Political Culture in the Age of Experts

“Strangers and Kin is a wonderful addition to the literature on adoption practices in the U.S. today, but it also offers a fresh angle on the general history of assumptions about the nature of the American family. I much appreciated Melosh’s even-handedness, her clear and original thinking in an area where positions are so polarized.”—Ellen Ross, author of Love and Toil: Motherhood in Outcast London, 1870–1918