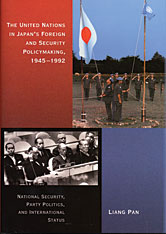 The United Nations in Japan's Foreign and Security Policymaking, 1945-1992

In the mid-1950s, as part of Tokyo’s goal of reinstating Japan as a full member of the international community, Japan sought and gained admittance to the United Nations. Since then, it has been a proactive member and a generous financial contributor to the organization. This study focuses on postwar Japan’s foreign policy making in the political and security areas, the core UN missions. It analyzes these two policy arenas from three perspectives—international political structure, domestic political organization, and the psychology of policymakers.

The intent is to illustrate how policy goals forged by national security concerns, domestic politics, and psychological needs gave shape to Japan’s complicated and sometimes incongruous policy toward the UN since World War II. In contrast to the usual emphasis on the role of the foreign-policy bureaucracy, however, the author argues that we must view the bureaucracy as functioning within a larger framework of party politics and interactions among government agencies, political parties, and other actors associated with these parties. The last part of the book addresses the psychological aspect of Japan’s UN policymaking in an effort to elucidate the role of national prestige in generating Japanese policy toward the UN.