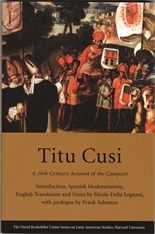 First written in 1570, this work now published for the first time in modern Spanish with an English translation sheds light on the Inqa (Inca) world. The writing of Instrucción followed more than a decade of negotiations and skirmishes between Inqa rebels and Spanish officials who were receiving their orders from Spain to find a diplomatic, or alternatively violent, solution to integrate these independently governed territories under Spanish colonial rule.