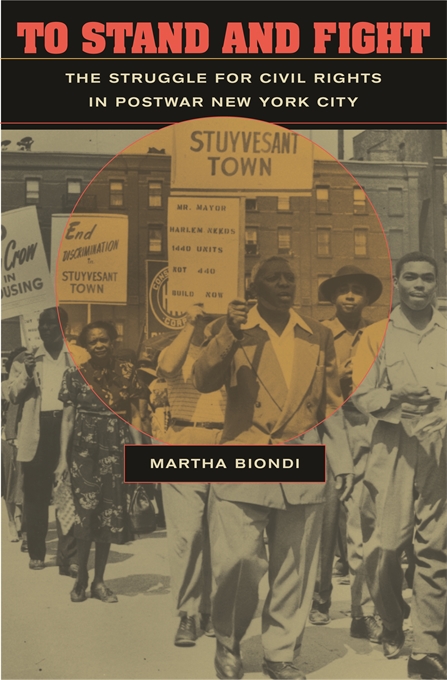 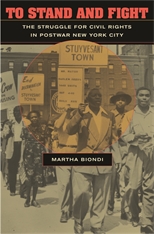 To Stand and Fight

The Struggle for Civil Rights in Postwar New York City

“Biondi’s book makes the counterintuitive point that the modern civil rights movement began in the north, not in the south. It did not begin with the Montgomery bus boycott; it did not begin with the Supreme Court desegregation decision of 1954. In the aftermath of World War II, the civil rights movement came alive in northern cities. She focuses on New York City. Biondi highlights the moment when racial egalitarianism became a core element of modern liberalism. It wasn’t before. In the 1930s Roosevelt worked closely with racist, segregationist Southern Democrats who controlled important committees. He needed them to get measures through Congress. In other words, you could be a good New Deal liberal and be a total racist. Many liberals were racial egalitarians but many liberals were racists. Views on race were not part of the definition of liberalism. Today you can’t be a racist and a liberal.”—Eric Foner, The Browser

“By examining the fight for equality in New York…Biondi…contribute[s] further to our understanding of race in America, in general, and the nature and course of the civil rights movement, more specifically.”—Peter B. Levy, Journal of American Ethnic History

“Martha Biondi…has written a scathing critique of the polities of anti-Communism—not just its often-paranoid fantasies and rights violations. Biondi powerfully argues that the damaging legacy of anti-Communism lies in the ways it crippled a vision for a more just and equal New York City, and, by extension, the nation by destroying the careers of many of its most visionary citizens. Biondi’s To Stand and Fight: The Struggle for Civil Rights in Postwar New York joins an emerging body of scholarship that overturns the Southern focus of Civil Rights history. Biondi takes us to New York—the home of the largest black community in the nation and, like its more notorious Southern counterparts, segregated in housing, schools, and most public and private accommodations. Biondi powerfully unravels hard and fast distinctions between Northern and Southern racism. Through an examination of numerous incidences of police brutality against African Americans in postwar NYC, the chapter on Northern lynching is a stark reminder of the state-sanctioned violence that ensured Northern segregation and inequality.”—Jeanne Theoharis, Left History

“In this meticulously researched monograph, Biondi reminds the reader that the struggle for black civil rights was waged in the North before it was joined in the South. She documents the fight against racial discrimination in hiring, police brutality, housing segregation, lack of political representation, and inadequate schools in New York City between 1946 and 1954… Biondi’s writing is crisp and direct. She introduces the reader to a host of activists whose efforts deserve to be remembered. Unfortunately, most of the causes they championed remain with us today.”—Paul T. Murray, MultiCultural Review

“Historians have thoroughly documented the experiences of those African Americans who lived in the South and worked to repeal Jim Crow laws. However, in this work, Biondi explores what she calls ‘the struggle for Negro rights’ in New York City, an exploration resulting in a stark reminder of the daily challenges facing blacks who lived in northern cities… With its detailed discussions of the American Labor Party, the Communist Party, Black Nationalism, Adam Clayton Powell Jr., W. E. B. Dubois, Roy Wilkins, and, especially, Paul Robeson, this work should be required reading for all historians interested in the post–WW II experience of African Americans in the urban North.”—T. D. Beal, Choice

“With stunning research and powerful arguments, Martha Biondi charts a new direction in civil rights history—the northern side of the black freedom struggle. Biondi presents postwar New York as a battleground, no less than the Jim Crow South, for the fight against police brutality and discrimination in employment, housing, retail stores, and places of amusement. Men and women, trade unionists and religious leaders, integrationists and separatists, liberals and the Left come together in this pathbreaking study of America’s largest and most cosmopolitan city.”—Evelyn Brooks Higginbotham, Editor-in-Chief of The Harvard Guide to African-American History

“To Stand and Fight brilliantly rewrites the history of postwar social movements in New York City. Martha Biondi has not only extended our view of the civil rights movement to the urban North, but she places the movement squarely within an international framework. She redefines the movement, focusing on the specific struggles that mattered: jobs, welfare, housing, police misconduct, political representation, and black people’s ongoing battle for independence in the colonies. To Stand and Fight will stand out as a major contribution to an already burgeoning field of civil rights studies.”—Robin D. G. Kelley, author of Freedom Dreams: The Black Radical Imagination

“To Stand and Fight establishes that New York was as important a battleground for racial equality as Montgomery or Birmingham. Martha Biondi has done a great service by uncovering the rich and largely forgotten history of New York’s role in the African American freedom struggle.”—Thomas J. Sugrue, author of The Origins of the Urban Crisis: Race and Inequality in Postwar Detroit