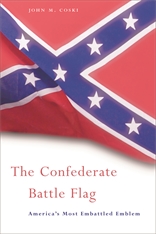 Listen to John Coski discuss the long and divisive history of the Confederate flag on NPR’s Morning Edition:

In recent years, the Confederate flag has become as much a news item as a Civil War relic. Intense public debates have erupted over Confederate flags flying atop state capitols, being incorporated into state flags, waving from dormitory windows, or adorning the T-shirts and jeans of public school children. To some, this piece of cloth is a symbol of white supremacy and enduring racial injustice; to others, it represents a rich Southern heritage and an essential link to a glorious past. Polarizing Americans, these “flag wars” reveal the profound—and still unhealed—schisms that have plagued the country since the Civil War.

The Confederate Battle Flag is the first comprehensive history of this contested symbol. Transcending conventional partisanship, John Coski reveals the flag’s origins as one of many banners unfurled on the battlefields of the Civil War. He shows how it emerged as the preeminent representation of the Confederacy and was transformed into a cultural icon from Reconstruction on, becoming an aggressively racist symbol only after World War II and during the Civil Rights movement. We gain unique insight into the fine line between the flag’s use as a historical emblem and as an invocation of the Confederate nation and all it stood for. Pursuing the flag’s conflicting meanings, Coski suggests how this provocative artifact, which has been viewed with pride, fear, anger, nostalgia, and disgust, might ultimately provide Americans with the common ground of a shared and complex history.