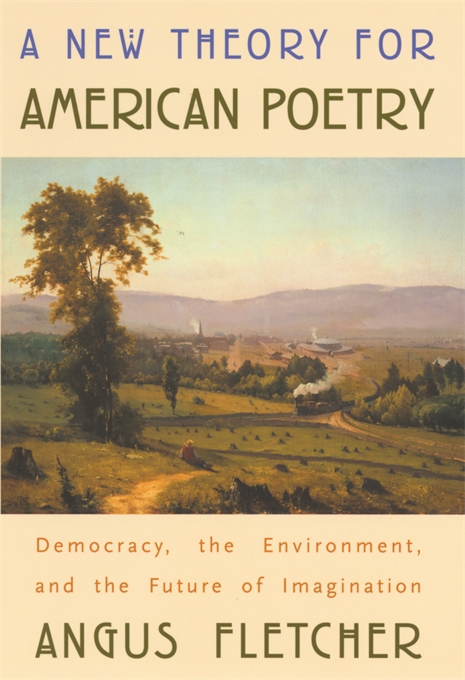 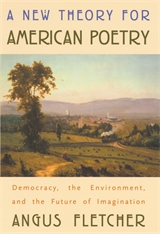 A New Theory for American Poetry

Democracy, the Environment, and the Future of Imagination

“Fletcher foregrounds a distinctly American vision of poetry, placing its roots not in European romanticism but in the works of Emerson and Whitman. He argues, along with Whitman, that poetry is inspired by science and shaped by nature. Fletcher’s Americanist perspective does not, however, preclude an understanding of the global impact of poetry and its centrality to the experience of human life in the broadest sense.”—American Literature

“This is work of serious scholarship, a theory and defense of poetry that at once reveals and revels in the power and beauty of nature-based, descriptive verse.”—Barbara Fisher, The Boston Globe

“In A New Theory for American Poetry, Fletcher may not have explained everything about his subject but what he has explained is enough to occupy most minds for a long time. By being so pliant itself, the book bends us with brilliance toward the work of the poets it reads… Many thanks to Fletcher for reshaping our critical posture.”—Andrew DuBois, The Harvard Review

“The year 2004 saw the publication of some ambitious critical works, perhaps none more so than Angus Fletcher’s A New Theory for American Poetry. The work blends criticism with poetics in setting out an account of what Fletcher sees as the distinctive achievements of American poetry, and an argument for how poets might continue to achieve the expression of a sense of ‘getting along within a population,’ crafting a democratic ‘gathering of energies’ in order to explore how ‘we adapt to the environments into which we are thrown by life.’ It includes detailed critical engagements with poets running from Whitman to the present day. The study of John Ashbery is particularly notable.”—The Year’s Work in English Studies

“Angus Fletcher restores the imagination, the aesthetic, the emotions and the natural world to critical discourse, while at the same time attending to some of the most significant developments in scientific thinking, notably ecology and chaos theory.”—Jonathan Bate, author of The Song of the Earth

“Fletcher’s new book is the crown of his career: bold, original, brimming with imaginative energy on every page. One doesn’t have to agree with his interpretations of John Clare, Walt Whitman, and John Ashbery (I myself do not) to benefit enormously from reading Fletcher. He is an Orphic seer, a curious universal scholar of Renaissance vintage, a fusion of the best traits of Northrop Frye and Kenneth Burke, his true peers.”—Harold Bloom, author of The Western Canon

“A powerful argument for a kind of poetics that represents and modern American consciousness. Fletcher does not argue for a poetry of environmental consciousness in the sense of political or ideological advocacy. One of the most pleasantly polemical aspects of the book is its rigorous adherence to a kind of formalism wonderfully attentive to what makes poetry unique and profound.”—Robert Faggen, author of Robert Frost and the Challenge of Darwin

“This is one of the most important books about poetic imagination of the past half-century. Lucid, generous in scholarly breadth, Fletcher analyzes our ideas of personal autonomy and political dependency. The book contains some of the most original discussions of John Clare, Walt Whitman, and John Ashbery I have ever seen. Fletcher’s own independent energies and philosophical learning help shape a brilliant exploration of environment and its representation.”—John Hollander, author of Picture Window

“In this prophetic work, Angus Fletcher reminds us that when Whitman speaks of theory ‘he does not mean anything like what scholars have been calling ‘theory’ ever since about 1965.’ He means poetics, and so does Fletcher. In his New Theory he reveals the revolutionary powers of poetic vision. This is done with no grinding of gears, no milling of rhetoric—no machinery at all. It is all thinking, and insight, and even a strange hilarity, as Fletcher imagines what our (American) poetry will be—will have to be (as it has been and become) or not be at all. I read this great theorist and discover again, again and anew, answers to our students’ tormented questions: what is the good, the value, the use of poetry?”—Richard Howard, author of Talking Cures

“This book will be an illumination to readers of poetry and an inspiration to those who write it. It truly brings news—Fletcher has climbed to the top of the mast and found there, revealed at last, the curvature of the world.”—Susan Stewart, author Columbarium

“Angus Fletcher defines a poetics for the twenty-first century by means of a very original collection of John Clare, Walt Whitman, and John Ashbery as Environmental Poets—poets, that is, who embrace the horizontal rather than the vertical, the non-teleological rather than the progressive, and the democratic rather than the hierarchical.”—Helen Vendler, author of The Art of Shakespeare’s Sonnets