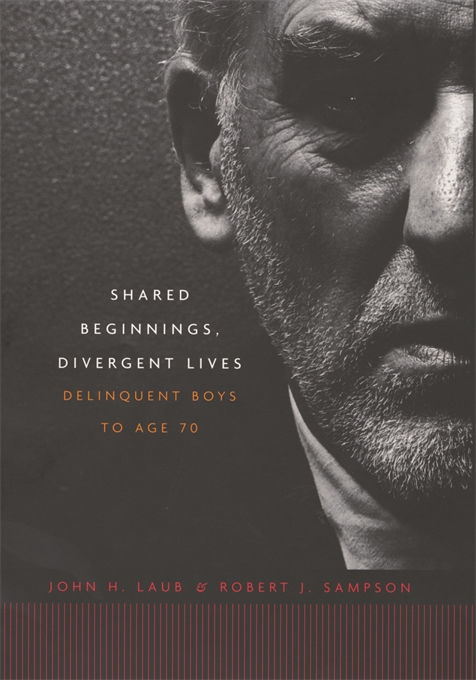 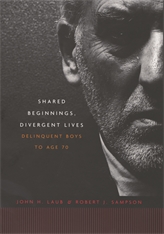 “This book analyzes newly collected data on crime and social development up to age 70 for 500 men who were remanded to reform school in the 1940s. Born in Boston in the late 1920s and early 1930s, these men were the subjects of the classic study Unraveling Juvenile Delinquency by Sheldon and Eleanor Glueck (1950). Updating their lives at the close of the twentieth century, and connecting their adult experiences to childhood, this book is arguably the longest longitudinal study of age, crime, and the life course to date. John Laub and Robert Sampson’s long-term data, combined with in-depth interviews, defy the conventional wisdom that links individual traits such as poor verbal skills, limited self-control, and difficult temperament to long-term trajectories of offending. The authors reject the idea of categorizing offenders to reveal etiologies of offending—rather, they connect variability in behavior to social context. They find that men who desisted from crime were rooted in structural routines and had strong social ties to family and community. By uniting life-history narratives with rigorous data analysis, the author shed new light on long-term trajectories of crime and current policies of crime control.”—Adolescence

“Shared Beginnings, Divergent Lives is a profound, complex, and sometimes difficult book. Nevertheless, it is enormously rewarding. The book, destined to become a classic, will sharpen readers’ awareness of adult development forever. The lessons of this book can be applied not only to criminality but also to the natural history of drug abuse, chronic unemployment, marital turmoil, and personality disorders.”—George E. Vaillant, M.D., American Journal of Psychiatry

“This is an invaluable and imaginative study that should provide data for criminologists to examine for years to come. The combination of quantitative and qualitative research methods is a refreshing break from the fetish with quantitative data that characterizes most criminological research.”—William Chambliss, American Journal of Sociology

“Shared Beginnings, Divergent Lives by John H. Laub and Robert J. Sampson does not directly address current penal policy, but it provides devastating evidence refuting many fallacies that underlie it. The volume provides the conclusion to a classic criminological study. In the 1940s Sheldon and Eleanor Glueck began to study a sample of 500 Boston men who were remanded to reform school. Between 1940 and 1965 the Gluecks collected a mass of data on this sample (and a matched non-deliquent control group). They were interviewed at an average age of fourteen, again at twenty-five, and finally at thirty-two. The results were published in the Gluecks’ seminal book Unravelling Juvenile Delinquency (1950) and subsequent works up to 1974. Shared Beginnings, Divergent Lives reports on Laub and Sampson’s attempts to contact and interview surviving members of the Gluecks’ original cohort, now aged around seventy… Combining statistical analysis with qualitative depth interviewing, their study illuminates the sources of desistance from, and persistence in, crime over the men’s lifetimes… There are many important lessons for current crime control discourse and policy that can be gained from this rigorous, sensitive and insightful study… If rehabilitation of offenders is possible (as this book demonstrates), then the current zero-sum refrain of crime control rhetoric that concern for victims precludes concern for offenders is refuted. Concern to protect victims requires concern for offenders.”—Robert Reiner, The Times Literary Supplement

“This book redraws the landscape of developmental criminology that Laub and Sampson already have done so much to define, setting new standards and benchmarks along the way. The authors both provide new evidence for earlier conclusions and challenge prevailing assumptions and assertions, thereby reshaping the criminological research agenda for years to come.”—John Hagan, Northwestern University

“The accounts of individuals are quite riveting, and the book can be recommended strongly purely for the stories provided about diverse lives. However, the book is much, much more than that in terms of the serious challenge that the authors’ findings and ideas present to some of the leading contemporary theories of both crime and development. A highly original and scholarly contribution of the highest quality.”—Sir Michael Rutter, Institute of Psychiatry, King’s College London