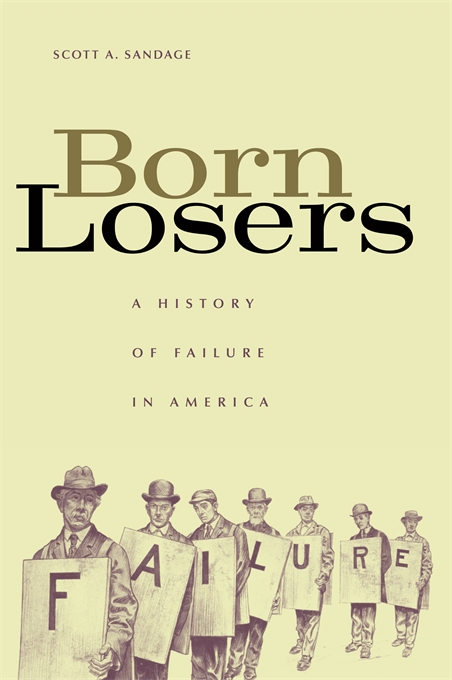 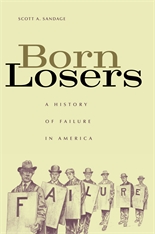 A History of Failure in America

“Born Losers, admirably concise and formidably researched, is the history of America’s reverse Horatio Algers. Scott A. Sandage, an associate professor of history at Carnegie Mellon University, logged a decade in the library to produce what amounts to an authoritative chronicle of the risks of lending and borrowing in 19th century America (although the book ranges well into the 20th).”—James Grant, The Wall Street Journal

“Sandage offers a poignant cultural account of 19th-century economic hardships and the pitiable archetype they gave birth to: the dismal ‘plodder,’ the man who was a ‘failure.’ He was the fellow who couldn’t get ahead, who couldn’t break through and probably never would. The fatal flaw that supposedly distinguished these born nonentities was their lack, it was thought, of a certain crucial vitality. In an age that equated vigor with virtue, this weakness was tantamount to immorality. To make the loser feel even worse about himself, his glorious antithesis—the striver, the up-and-comer—was being defined at the same time. Writers promoting the secrets of success in the rough game of industrial capitalism rendered a verdict on economic failure that still endures: it’s never an accident. The success people have is determined by who they are—or rather, by who they aren’t—and not by circumstances. This brutish superstition persists, despite our increasingly scientific perspective on economic and financial developments. When experts wielding charts and graphs refer to ‘bottoms’ and spells of ‘negative growth,’ the jobless take scant consolation, I have a hunch. A nation that thinks of material well-being as the prize in a competition or a race instills in its citizens a moral horror of ever giving up, even if the contest can have few winners and the course is all uphill.”—Walter Kirn, The New York Times Magazine

“Words like ‘loser’ and ‘failure’ have been in our vocabulary since at least the 16th century, but only recently have they come to describe a person’s moral condition. How this happened and what constitutes failure as we understand it today are the subject of Scott A. Sandage’s new book… Through fascinating testimonies from diaries, credit reports and court records, Sandage gives the ‘loser’ a significant—if not defining—role in the development of the institutions and values that emerged from the 19th century and that continue to inform our experience today… Making illuminating use of Weber, Emerson, Tocqueville and Thoreau, among others, Sandage identifies the beliefs that led to America’s peculiar—if not intemperate—embrace of business as a national religion and the transference of old morals onto a new map. Locating vice in the individual to explain business failures was simply a reconfiguration of the doctrine of predestination, which held that some are saved and others condemned. Likewise in the market there were born winners and born losers; the central challenge of business was knowing one from the other… The glorification of personal accountability is a curious, if not damaging, tradition, and Sandage does a marvelous job of tracing its evolution.”—Maria Fish, The San Francisco Chronicle

“By examining the lives and careers of a number of businessmen who failed during the 19th century, [Sandage] portrays what we reflexively think of as the darker side of the American dream but what is, in reality, an only slightly exaggerated mirror of the reality with which ordinary people—i.e., thee and me—are fated to contend… For the most part Born Losers is readable, interesting and thoroughly researched… We understand the human side of failure far more keenly than we did a couple of centuries ago, but we still fear it and still believe—against all the evidence—that somehow we can and will escape it.”—Jonathan Yardley, The Washington Post

“In this book about the cultural ramifications of economic failure in nineteenth-century America, Sandage has taken on an important and underexamined subject and scrutinized it in inventive ways, using unexpected and largely unmined sources.”—Benjamin Schwarz, The Atlantic

“Scott Sandage has written a splendid book… A new American generation pushes its economic faith about the world. Everyone ought to race for success and let the devil take the hindmost (as the original Puritans quite literally expected him to). Sandage has done a marvellous job exploring the dark side of this peculiar American gospel: the blithe judgment that failure reflects a personal defect, that want is a species of sin, and the insistence that the sources of wealth and poverty lie entirely ‘in the man.’”—James Morone, London Review of Books

“Sandage’s book is a rich and fascinating exposition of how failure, once deemed an accident of fortune, has been turned into an ontological category, an explanation of fate based on an essence of the individual, an intangible identity bequeathed at birth. It is a harsh and cruel judgment, usually disguised as condescension or pity. For children and teenagers, it is a taunt—Loser!—that consigns the designee to hell… This is the sort of deeply critical and deeply caring book that is too seldom seen in cultural studies… You cannot come away from this elegant book without a heightened awareness of the devastating costs of the go-ahead mandate for the downsized corporate executive, the bank teller denied a promotion year after year, the college graduate struggling to spring loose of internships to land a real job.”—Christine Stansell, The New Republic

“Born Losers is an elegantly written, carefully crafted account of how Americans have coped with failure over the past 200 years… The entire book is a pleasure for anyone to read.”—Allan Winkler, The Times Higher Education Supplement

“Born Losers rifles through diaries and financial records, piecing together an engaging tale of 19th-century America as seen from the bottom of the barrel. Peeking into long-forgotten bankruptcy cases, the author provides poignant glimpses of men ensnared in Bleak House–style webs of misery. Society had little sympathy for these ruined creatures, often honest men ambushed by hard times. The newly popular notion that anyone could prosper in America led people to blame those who didn’t.”—Joy Press, The Village Voice

“This is a fascinating book, both as history and moral history. The decade or so Sandage spent on it has paid off in its copious scholarship and polished writing. His epigrammatic style is thought provoking… The mostly 19th century history is revelatory, but his epilogue bringing his topic into the present, through the Great Depression, Willy Loman and Charlie Brown, to Bob Dylan, is positively scintillating.”—William S. Kowinski, Books in Heat

“[O]ne would be the loser for taking a pass on this book, for Scott Sandage is a historian of exceptional gifts, and those gifts—a rich historical imagination, and keen archival eye and a carefully crafted prose style—make Born Losers a richly rewarding read… Born Losers belongs to that marvelously mixed genre of retrospective ethnography and philosophical meditation that the anthropologist Clifford Geertz has called ‘the social history of the moral imagination.’”—Jean-Christophe Agnew, Business History Review

“The book presents a convincing argument and is winningly alive to literary parallels—success may be the grand theme of American history, but failures, from Bartleby through Gatsby to Willy Loman, dominate its literature.”—Robert Hanks, The Daily Telegraph

“In Scott Sandage’s provocative new study, Born Losers, the Carnegie Mellon University professor notes that not long ago, ‘loser’ meant only that a person had lost money or a house. It described an event; it didn’t declare a person completely worthless. His study examines how we came to make that change, how we internalized it and enshrined it in our culture… Sandage has mined a dark, rich vein, and, as in his deeply felt epilogue, he can write with great compassion.”—Jerome Weeks, The Dallas Morning News

“Sandage follows a paper trail that reveals the hidden history of pessimism in a culture of optimism. Besides documents frequently examined by historians—diaries and correspondence, for example—he explores genres such as business manuals, credit reports and even suicide notes… Ultimately, Sandage tells the story of losers to expose the history of the ‘culture of personality’ in capitalist America. ‘We can learn a great deal about our culture and about ourselves from the stories of Americans who failed,’ he insists. And that history, he writes, shows that we have ‘embraced business as the dominant model for our outer and inner lives.’”—Alex Lichtenstein, The Houston Chronicle

“This long-anticipated, thought-provoking cultural history of failure in the United States deserves a punch-line beginning. Born Losers is a must read for anyone interested in American identity formation, the expansion of capitalism as political-economy and article of faith, the construction of economic striving as a moral imperative, and the psychological and social costs of a national ideology centered on self-reliance and economic ambition as the hallmarks of a successful life… Like all important books, Born Losers will spark debate. Sandage draws broad conclusions from narratives constructed by white businessmen (most of whom had connections of some kind to Americans who exemplified ‘success’)… By concluding that failure ‘is not the dark side of the American Dream [but rather] the foundation of it,’ Sandage challenges historians to reexamine the so-called ‘losers’ and ‘winners’ in American life. That alone makes Born Losers a significant contribution to the expanding literature on failure. But he also raises other important questions about the less-than-lovely side of American culture and global market relations.”—Jocelyn Wills, Journal of Social History

“In his book, Sandage explains how the 19th century changed people’s ideas about winning and losing.”—Pat Burson, Newsday

“[A] densely packed history of capitalism’s dark side… Sandage’s history of another America that paved the way for this one is instructive and fascinating.”—Bob Hoover, The Pittsburgh Post-Gazette

“Here is a feast of historical insight, personal narrative, and literary panache. With his focus on the making of economic failure, Sandage enables us to see and understand 19th century America in an entirely new, provocatively sober way… A fascinating book.”—Michael Kazin, author of The Populist Persuasion: An American History

“Americans do not like to talk about failure. It is the underside of an American dream that stresses winning over losing, succeeding over succumbing. But not everyone makes it and the story of failure has a history that Scott Sandage probes with subtlety and grace in this impressive work of cultural history. Born Losers is deeply researched, carefully argued, and well written. His examination of commercial failure and the problems of identity goes a long way toward reconfiguring our understanding of the American dream.”—Louis P. Masur, author of 1831: Year of Eclipse

“Born Losers is a beautiful piece of writing. Scott Sandage is history’s Dickens; his bleak house, the late nineteenth century world of almost anonymous American men who failed. With wit and sympathy, Sandage illuminates the grey world of credit evaluation, a little studied smothering arm of capitalism. This is history as it should be, a work of art exploring the social cost of our past.”—William S. McFeely, author of Grant: A Biography

“I found Born Losers a confirmation of an old belief that in American history there is a crash in every generation sufficient to mark us with a kind of congenital fear of failure. This is a bright light on a buried strain in the evolution of the United States.”—Arthur Miller