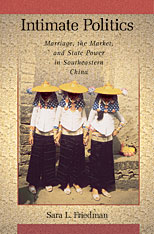 Marriage, the Market, and State Power in Southeastern China

On a visit to eastern Hui’an in 1994, Sara Friedman was surprised to see a married woman reluctant to visit her conjugal home. The author would soon learn that this practice was typical of the area, along with distinctive female dress styles, gender divisions of labor, and powerful same-sex networks. These customs, she would learn, have long distinguished villages in this coastal region of southeastern China from other rural Han communities.

Intimate Politics explores these practices that have constituted eastern Hui’an residents, women in particular, as an anomaly among rural Han. This book asks what such practices have come to mean in a post-1949 socialist order that has incorporated forms of marriage, labor, and dress into a developmental scale extending from the primitive to the civilized. Government reform campaigns were part of a wholesale effort to remake Chinese society by replacing its “feudal” elements with liberated socialist ideals and practices. As state actors became involved in the intimate aspects of Huidong women’s lives, their official models of progress were challenged by the diversity of local practices and commitment of local residents. These politicized entanglements have generated what the author calls “intimate politics,” a form of embodied struggle in which socialist civilizing agendas—from the state-sponsored reforms of the Maoist decades to the market-based “reform and opening” of the post-Mao era—have been formulated, contested, and, in some cases, transformed through the bodies and practices of local women.