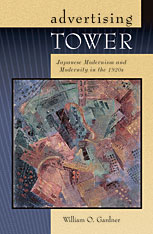 Japanese Modernism and Modernity in the 1920s

On a December morning in 1925, a newspaper journalist reported receiving 25 different handbills in an hour’s walk in downtown Tokyo, advertising everything from Western-style clothing and furniture to sweet shops, charity organizations, phonograph recordings, plays, and films. The activities of advertisers, and the new entertainment culture and patterns of consumption that they promoted, helped to define a new urban aesthetic emerging in the 1920s.

This book examines some of the responses of Japanese authors to the transformation of Tokyo in the early decades of the twentieth century. In particular, it explores the themes and formal strategies of the modernist literature that flourished in the 1920s, focusing on the work of Hagiwara Kyojiro (1899-1938) and Hayashi Fumiko (1903-1951). William Gardner shows how modernist works offer new constructions of individual subjectivity amid the social and technological changes that provided the ground for the appearance of “mass media.” Hagiwara’s conception of the poem and poet as an electric-radio “advertising tower” provides an emblem for the aesthetic tensions and multiple discourses of technology, media, urbanism, commerce, and propaganda that were circulating through the urban environment at the time; while Hayashi’s work, with its references to popular songs, plays, and movies, suggests an understanding of "everyday life" as the interface between individual subjectivity and a highly mediated environment.