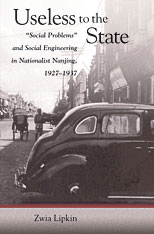 Useless to the State

In 1911, Joseph Bailie, a professor at Nanjing University, often took his Chinese students to tour Nanjing’s shantytowns. One student, the son of a district magistrate, followed Bailie from hut to hut one rainy day, and was grateful that Bailie opened his eyes to the poverty in his own city. However, twenty years later, when M. R. Schafer, another Nanjing University professor, showed his students a film that included his own photographs of the poor quarters of Nanjing, his students were so upset that they demanded his expulsion from China.

Zwia Lipkin explores the reasons for these starkly different reactions. Nanjing in the 1910s was a quiet city compared to 1930s Nanjing, which was by that time the national capital. Nanjing had become a symbol of national authority, aiming not only to become a model of modernization for the rest of China, but also to surpass Paris, London, and Washington. Underlying all of Nanjing’s policies was a concern for the capital’s image and looks—offensive people were allowed to exist as long as they remained invisible.

Lipkin exposes both the process of social engineering and the ways in which the suppressed reacted to their abuse. Like Professor Schafer’s movie, this book puts the poor at the center of the picture, defying efforts to make them invisible.