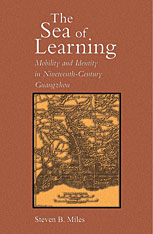 The Sea of Learning

Mobility and Identity in Nineteenth-Century Guangzhou

In 1817 a Cantonese scholar was mocked in Beijing as surprisingly learned for someone from the boondocks; in 1855 another Cantonese scholar boasted of the flourishing of literati culture in his home region. Not without reason, the second man pointed to the Xuehaitang (Sea of Learning Hall) as the main factor in the upsurge of learning in the Guangzhou area. Founded in the 1820s by the eminent scholar-official Ruan Yuan, the Xuehaitang was indeed one of the premier academies of the nineteenth century.

The celebratory discourse that portrayed the Xuehaitang as having radically altered literati culture in Guangzhou also legitimated the academy’s place in Guangzhou and Guangzhou’s place as a cultural center in the Qing empire. This study asks: Who constructed this discourse and why? And why did some Cantonese elites find this discourse compelling while others did not? To answer these questions, Steven Miles looks beyond intellectual history to local social and cultural history. Arguing that the academy did not exist in a scholarly vacuum, Miles contends that its location in the city of Guangzhou and the Pearl River Delta embedded it in social settings and networks that determined who utilized its resources and who celebrated its successes and values.