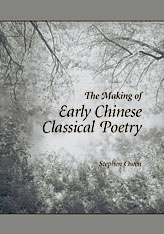 Over the centuries, early Chinese classical poetry became embedded in a chronological account with great cultural resonance and came to be transmitted in versions accepted as authoritative. But modern scholarship has questioned components of the account and cast doubt on the accuracy of received texts. The result has destabilized the study of early Chinese poetry.

This study adopts a double approach to the poetry composed between the end of the first century B.C.E. and the third century C.E. First, it examines extant material from this period synchronically, as if it were not historically arranged, with some poems attached to authors and some not. By setting aside putative differences of author and genre, Stephen Owen argues, we can see that this was “one poetry,” created from a shared poetic repertoire and compositional practices. Second, it considers how the scholars of the late fifth and early sixth centuries selected this material and reshaped it to produce the standard account of classical poetry.

As Owen shows, early poetry comes to us through reproduction—reproduction by those who knew the poem and transmitted it, by musicians who performed it, and by scribes and anthologists—all of whom changed texts to suit their needs.