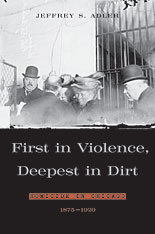 First in Violence, Deepest in Dirt

Between 1875 and 1920, Chicago’s homicide rate more than quadrupled, making it the most violent major urban center in the United States—or, in the words of Lincoln Steffens, “first in violence, deepest in dirt.” In many ways, however, Chicago became more orderly as it grew. Hundreds of thousands of newcomers poured into the city, yet levels of disorder fell and rates of drunkenness, brawling, and accidental death dropped. But if Chicagoans became less volatile and less impulsive, they also became more homicidal.

From rage killers to the “Baby Bandit Quartet,” Adler offers a dramatic portrait of Chicago during a period in which the characteristic elements of modern homicide in America emerged.