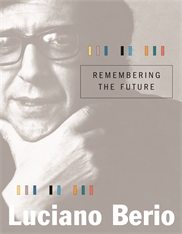 “Music, in Berio’s view, is palpable and pliable, but also unstable, ready to be altered as more futures intervene in more pasts—just as he, in his own works, intervened in Schubert, in Monteverdi, and in Sicilian folk song. The six lectures nominally move from one topic to another: the nature of music as memory, of musicians as operator in ‘an immense library of musical knowledge’: the ways in which stretches of musical time can be re-traversed in copies, arrangements, and more distant adaptations; the impossibility of forgetting, and yet also the need for the new; the endless openness of the musical work, always remaining to be completed not only by further performances but also by further compositions that will excite sympathetic vibrations in it; opera as music made visible; and the interpenetrations of poetics and analysis. Yet these are by no means watertight compartments. Tidal swells wash through… Like any great artist, Berio speaks of himself when he speaks of others. A lot of his own music, as much as Stravinsky’s, has to do with collecting and copying precious objects—objects which become more precious in the process… Reading Remembering the Future is a valuable adjunct to listening to Berio’s music, the two experiences so much resembling each other in their richness of reference. Poignantly, the book even remembers the future of the composer’s own output. In an early passage he compares music to ‘a huge, protective building, designed by history and constructed over several millennia,’ where we may wander through ‘the Ars nova room, the Baroque room, the Schubert, Mahler, and Stravinsky rooms,’ and so on. Rooms—Stanze—was to be the title of Luciano Berio’s last completed composition before his death in 2003.”—Paul Griffiths, The Times Literary Supplement

“These texts are a long way from the multilayered, often abrasive allusiveness of Berio’s best compositions, yet even he was able to go some way to justifying the claim that a composer can still, occasionally, be the best commentator on his own works.”—Arnold Whittall, Musical Times