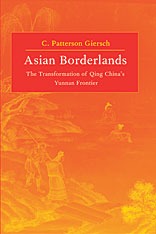 C. Patterson Giersch provides a groundbreaking challenge to the China-centered narrative of the Qing conquest through comparative frontier history and a pioneering use of indigenous sources. He focuses on the Tai domains of China’s Yunnan frontier, part of the politically fluid borderlands, where local, indigenous leaders were crucial actors in an arena of imperial rivalry.

Patterns of acculturation were multi-directional. Both Qing and Tai created a hybrid frontier government that was tested as Burma and Siam extended influence into the region. As Qing and Chinese migrants gained greater political and economic control in borderland communities, indigenes adopted select Chinese ways. Chinese language was useful for trade, and relations with imperial officials were eased by wearing the queue and donning imperial robes. But indigenous culture and livelihoods persisted, and Tai aristocrats adopted rituals and symbols of the Burmese and Siamese courts.

Qing conquest and Chinese migration did not lead to simple patterns of incorporation and assimilation. Chinese economic and cultural influences were profound, but did not entirely undermine indigenous practices. These legacies, which would shape and complicate twentieth-century Chinese state building, hold an important key to understanding modern China.