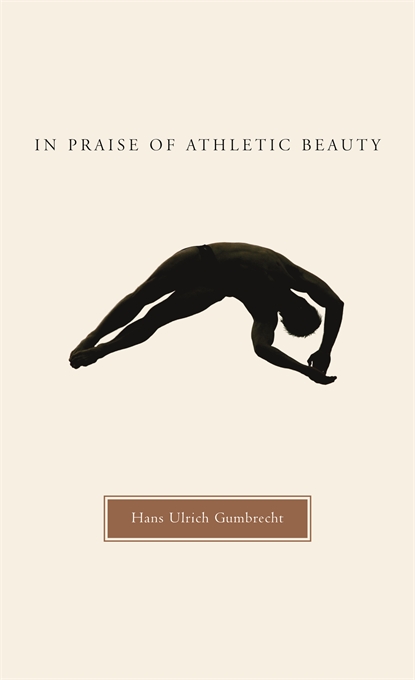 In Praise of Athletic Beauty

“As our efforts to explain and predict are baffled, we retreat into pure pleasure. Then the question becomes: Enjoy what, how? Fortunately, a new book helps lead us back to becoming the armchair aesthetes we were all along. In Praise of Athletic Beauty, by Hans Ulrich Gumbrecht…is the book, and football the central game… Gumbrecht really is a fan, and he is trying to make sense of a fan’s experience. Instead of focusing on the easy cases—everybody can admire divers and gymnasts and the lacier kind of ice skaters—he takes for his subject the aesthetic of ballgames, which, he points out, began to become central to Western life as spectator sports only a century ago. His central thesis, to round it out a little crudely, is that we watch sports not out of identification with the players but out of a kind of happy absorption in someone else’s ability.”—Adam Gopnik, The New Yorker

“How would Kant, who tried to define beauty, feel about a perfectly turned double play? He’d love it, says Hans Ulrich Gumbrecht. The Stanford comparative literature professor’s In Praise of Athletic Beauty is a thought-provoking—and academically rigorous—defense of the grace and aesthetic worth of sports.”—Sports Illustrated

“Marvelous… Gumbrecht pays moving tribute to the aesthetic excellence of great athletes and describes the deep human satisfactions that great athletic performances give to those who watch them, whether as partisans or as connoisseurs.”—Leon R. Kass and Eric Cohen, The New Republic

“Reading In Praise of Athletic Beauty by Hans Ulrich Gumbrecht is indeed a valuable experience… Gumbrecht has eye-opening ideas on the transformative power of athletics—how, for example, a sumo wrestler, the most undignified and ungraceful of athletes outside the ring, can suddenly become the embodiment of dignity and grace inside it.”—Sports Illustrated

“Gumbrecht laments that most contemporary academic analyses of ‘sport’ as a cultural phenomenon tend to be socially patronizing, dismissive of sports fans as having fallen for a modern-day version of the old bread and circus treatment. Such thinkers, he argues, ‘find it difficult to admit that the fascination with sports can have respectable roots in the realm of aesthetic appeal’ more typically associated with the so-called high arts. Conditioned to look for aesthetic pleasure in a concert hall or museum, we fail to recognize that watching a tense seventh game of the World Series (or a championship fight or a 100-meter dash) might be considered a legitimate aesthetic experience as well.”—Matthew McGough, The Boston Globe

“Written for the common reader in an approachable fashion, this delightful volume draws on Gumbrecht’s favorite athletic experiences.”—Michael Novak, Claremont Review of Books

“Yes, being a sports fan is not pure aesthetic appreciation: it is deeply enmeshed, as Bourdieu and others could easily show, in social, psychic, economic, and political strategies. But, if the aesthetic dimension that Gumbrecht praises is ignored, it is difficult even to understand these strategies or to grasp why they are attached to this set of human activities and not another.”—Stephen Greenblatt, Harvard Magazine

“Professor of Literature Hans Gumbrecht is a sports fan. Not only a sports fan; Professor Gumbrecht is a fan of sports fans, so much so that he has written In Praise of Athletic Beauty to describe, and to make respectable, the hours spent watching baseball, football, tennis, and other sports. Dissatisfied with the academy’s somewhat elitist dismissal of sport as just another capitalist banality, Gumbrecht wants to argue that there is more to the roar of the crowd than mere tribalism. To Gumbrecht, the current mass appeal of sports represents more than the manipulation of the masses by advertising corporates. There is something almost transcendental about sport; some aesthetic quality that united us with the Greeks, the Romans, even with the gods themselves as we admire the movement of a body, or revel in the million to one victory… The writing is clear and approachable… There is plenty to hold the attention of the reader. In Praise of Athletic Beauty is a paean to what sports fans already love: sports.”—Tony O’Brien, Metapsychology Online Reviews

“In sharp contrast to the intellectuals who dismiss sports as mindless popular amusements, Gumbrecht finds in athletics the occasion for aesthetic contemplation. In the spirit of Pindar’s odes praising ancient Greek boxers and charioteers, Gumbrecht hails today’s sprinters and swimmers, linebackers and forwards, as icons of muscular grace. Surprisingly, the spectacle of athletic competition answers well to the analytical terms Kant employed in his eighteenth-century theory of beauty. That wonderful spectacle lifts participant and spectator alike into a focused intensity luminously different from the gray routine of ordinary life. As he surveys the epic panorama of sports—from the Panhellenic games of antiquity to the Olympic Games of today—Gumbrecht ponders the adroitness of athletes who tempt us to believe in perfection and the violence of antagonists who entrance us with the pathos of suffering. In this acute analysis, the blindness of those who see in sports nothing but an empty show gives way to a radiant vision that fuses the feats of great athletes with the poetry of Goethe and the wisdom of Plato. To be sure, Gumbrecht acknowledges—and laments—the nearly ubiquitous commercialization of modern sports. But the distracting hype of advertisers cannot fully obscure the sublime composure of the athlete nor quench the sincere gratitude of the spectator. A remarkable commentary, light-years from the clichés typical of sports writing.”—Bryce Christensen, Booklist

“With this study of athletic aesthetics, Stanford literature professor Gumbrecht scores as the sports world’s answer to Marshall McLuhan… Gumbrecht goes beyond the usual conventions of sportswriting to probe the pleasures of sports spectatorship; his centerpiece is a philosophical, historical survey spanning centuries. He looks at the ancient Olympiads, whose champions were elevated to the status of demigods. Gladiatorial games were ‘metaphors for human existence,’ more brutal than the choreographed pageantry of knightly tournaments. After examining bare-knuckled boxing, Gumbrecht segues into the dawn of team sports and the 1896 revival of the Olympics… Gumbrecht’s writing is as potent and graceful as the athletes he admires.”—Publishers Weekly

“Sports plays a central role in our American culture. Yet, there is deep reluctance—almost embarrassment—among the intellectual class to acknowledge the enjoyment of spectator sports. In Praise of Athletic Beauty, by Hans Gumbrecht, frees us to embrace this enjoyment. For Gumbrecht locates sports viewing within the nexus of aesthetic experience. This marvelous book—both in content and style—offers a philosophically sophisticated explanation of the beauty of athletic performance. I recommend it most strongly, especially to closet fans and critics of sports.”—Myles Brand, president of the National Collegiate Athletic Association

“Hans Ulrich Gumbrecht’s book on athletic beauty achieves an athletic beauty of its own when it heroically resists the temptation of meaning. His refusal to justify athletic endeavors by positing for them consequences beyond the exhilarating moment of performance is bracing and deeply true to the phenomena that obsess him.”—Stanley Fish, Davidson-Kahn Distinguished University Professor of Humanities and Law, Florida International University

“Gumbrecht articulates what sports enthusiasts feel about athletes and their achievements. His vast knowledge of the history and philosophy of sports, combined with his passionate intellectual perspective, make this important reading for those who question the value of athletics in our time.”—Walt Harris, Bradford M. Freeman Director of Football, Stanford University

“Now that sports have climbed to an apex of obsession in our society, here comes a book that fascinates in probing why we play sports and why we watch sports with such fervor. In Praise of Athletic Beauty considers Kant, Descartes, Nietzsche, and a host of intellectuals throughout history to get to the bottom of our love affair with athletes and their pursuit of excellence. Gumbrecht explores with a scholarly and yet charming curiosity the admiration for athletes that so many of us share. Page by page, I found myself exclaiming: ‘Yes, that’s what moves me when I see a sprinter striding down the Olympic straightaway!’ This is a thought-provoking and most original addition to current sports literature.”—Diana Nyad, television, radio, and print sports journalist and former world champion marathon swimmer