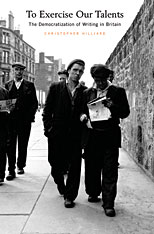 To Exercise Our Talents

The Democratization of Writing in Britain

Writing as an organized pursuit emerged in the 1920s, complete with clubs, magazines, guidebooks, and correspondence schools. The magazine The Writer helped coordinate a network of “writers’ circles” throughout Britain that offered prospective authors—especially women—outside the educated London elite a forum in which to discuss writing. The legacy of Wordsworth and other English Romantics encouraged the belief that would-be authors should write about what they knew personally—that art flowed from genuine experience and technique was of secondary importance. The 1930s saw a boom in the publication of so-called proletarian writing, working-class men writing “in my own language about my own people,” as Birmingham writer Leslie Halward put it. During World War II, soldiers turned to poetry to cope with the trauma of war, and the popular magazine Seven promoted the idea that anyone, regardless of social background, could be a creative writer. Self-expression became a democratic right.

In capturing the creative lives of ordinary people—would-be fiction-writers and poets who until now have left scarcely a mark on written history—Hilliard sensitively reconstructs the literary culture of a democratic age.