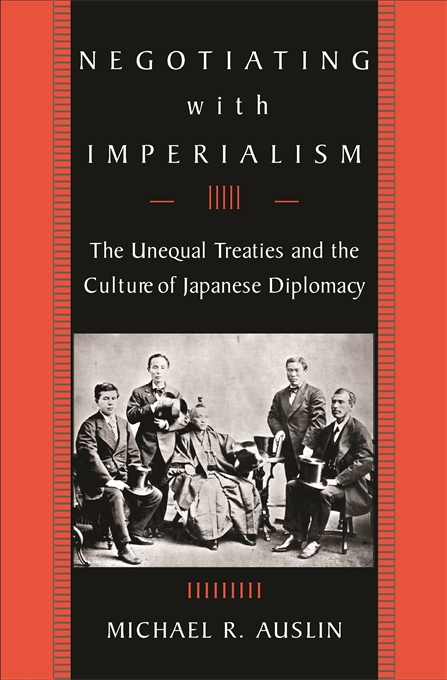 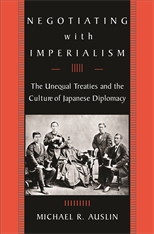 The Unequal Treaties and the Culture of Japanese Diplomacy

Japan’s modern international history began in 1858 with the signing of the “unequal” commercial treaty with the United States. Over the next fifteen years, Japanese diplomacy was reshaped to respond to the Western imperialist challenge. Negotiating with Imperialism is the first book to explain the emergence of modern Japan through this early period of treaty relations.

Michael Auslin dispels the myth that the Tokugawa bakufu was diplomatically incompetent. Refusing to surrender to the West’s power, bakufu diplomats employed negotiation as a weapon to defend Japan’s interests. Tracing various visions of Japan’s international identity, Auslin examines the evolution of the culture of Japanese diplomacy. Further, he demonstrates the limits of nineteenth-century imperialist power by examining the responses of British, French, and American diplomats. After replacing the Tokugawa in 1868, Meiji leaders initially utilized bakufu tactics. However, their 1872 failure to revise the treaties led them to focus on domestic reform as a way of maintaining independence and gaining equality with the West.

In a compelling analysis of the interplay among assassinations, Western bombardment of Japanese cities, fertile cultural exchange, and intellectual discovery, Auslin offers a persuasive reading of the birth of modern Japan and its struggle to determine its future relations with the world.