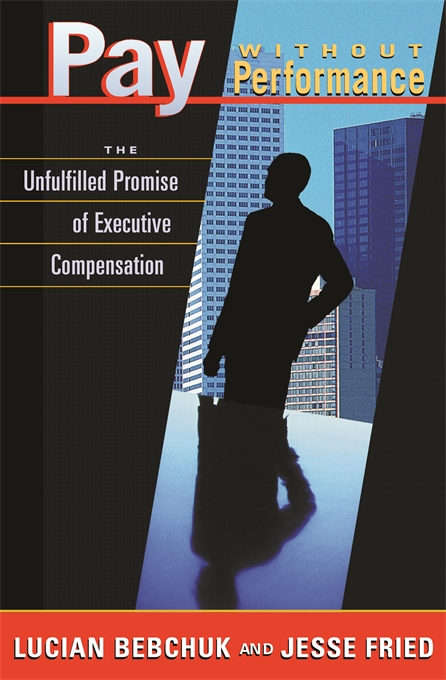 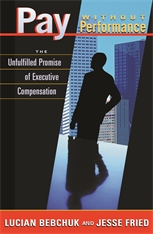 The Unfulfilled Promise of Executive Compensation

“Lucian Bebchuk and Jesse Fried offer a devastating critique of the way public companies pay their top executives. Relying on data rather than rhetoric, Fried and Bebchuk describe a diseased system in which executives wield enormous influence over their pay, board members have little incentive to slow the gravy train, and everyone involved goes to great lengths to hide the numbers from shareholders… Those looking for a substantive deconstruction of the system—and a few ideas to fix it—could hardly do better.”—Ben White, The Washington Post

“Ever wonder if corporate executives are paid too much? Look at it this way: from 1993 to 2002, the aggregate compensation of the top five executives in all public companies amounted to an astonishing $250 billion, equivalent to 7.5% of all corporate earnings. Defenders of the status quo say that such bloated pay provides managers particularly CEOs with incentives crucial to high performance. Those defenders have not yet read Lucian Bebchuk and Jesse Fried’s Pay Without Performance. The authors marshal a formidable arsenal of facts to pick apart the incentives argument, exposing myriad ways in which CEOs have decoupled pay from performance and hidden that fact from investors with the aid of supine corporate directors. The lucidly argued treatise frames the issue not in ethical terms but as a problem of efficiency. As for solutions, Bebchuk and Fried maintain that board directors should be not only more independent of the executives they supervise but also much more dependent on stockholders. If shareholders had the power to alter the composition of the corporate board, the authors argue, directors would be more likely to keep investors’ interests top of mind when setting CEO salaries and perks.”—Unmesh Kher, Time

“For anyone looking for a guide to the debate over American top pay, this book will be indispensable. It is clear, well-argued, fully researched and deeply felt.”—Michael Skapinker, Financial Times

“In times both bullish and bearish, there is periodic outrage over huge compensation packages for executives at publicly traded companies. The recent wave of corporate scandals only inflamed concerns that companies’ boards of directors, too cozy with CEO’s, were betraying their duty to shareholders. Reacting, defenders of corporate America have often offered ‘rotten apple’ theories and other explanations that deny any systemic problem. Inadequate, say Lucian Bebchuk, a professor of law, economics, and finance at Harvard University, and Jesse Fried, a professor of law at the University of California at Berkeley. In Pay Without Performance, the scholars uncover what they say are widespread, persistent, and indeed systemic flaws in compensation arrangements.”—Nina C. Ayoub, The Chronicle of Higher Education

“In Pay Without Performance, Lucian Bebchuk of Harvard and Jesse Fried of Berkeley set out to identify the failure of corporate governance that allows chief executives’ compensation to carry on rising with little relation to performance. They point the finger firmly at board directors.”—The Economist

“Pay Without Performance is a significant book. It is a well-researched, careful study of a problem that has attracted considerable attention since the 1980s. The authors write well and manage at once to make the book readable and to satisfy the scholar’s need to see evidence and documentation… Pay Without Performance is an important contribution to the continuing discussion about corporate governance. It will repay a careful reading, and it is likely to achieve the influence it deserves to have.”—Robert G. Kennedy, Ethics and Economics

“If one has time to read only a single book about corporate governance in US publicly traded companies, this is the book to read.”—James A. Fanto, International Company and Commercial Law Review

“I rate this as an important book that should help to get the academic profession thinking in a new direction. The supporters of the conventional model of compensation clearly have a case to answer, and this book makes it plain what the challenges to developing a better understanding of executive compensation are. Thus, it will surely generate a productive debate… The book should also be seen as a welcome contribution to the corporate-governance debate in Europe, as it provides a sobering perspective on what many regard as a role model. Everybody who wants to participate in the debate on executive compensation should read this book.”—Ernst Maug, Journal of Institutional and Theoretical Economics

“This book has important messages about where [the balance between managers, directors, and shareholders] should lie, not just with regard to executive compensation but to governance in general.”—Peter Montagnon, Management Today

“Like Thomas Paine’s Common Sense in an earlier era, Pay Without Performance is a terse manifesto for our age of manager’s capitalism—a crystal clear and dispassionate, but ultimately devastating, analysis of how our deeply flawed system of corporate governance has led to grossly excessive executive compensation. This is a book that must be read, not only by any citizen who cares about sound corporate governance, but by any citizen who cares about our society—the best book that I’ve ever read on the subject.”—John C. Bogle, Founder, The Vanguard Group

“Bebchuk and Fried, careful scholars of the first rank, develop a compelling critique of the market for managerial services. Pay is decoupled from performance. Executive compensation is neither fair nor efficient, operating as much on stealth as on open negotiation. Their evidence, their conclusions, and their recommendations cannot be ignored; they should be studied by boards, courts, the SEC—and anyone who wants contemporary corporate governance to work.”—John Coffee, Jr., Columbia Law School

“Bebchuk and Fried have written a superb book. It will benefit academics and non-academics alike, and shed much light on the great executive pay debate.”—Graef Crystal, author of In Search of Excess

“The most important change in corporate structure in the United States has been the shift of authority from stockholders and their directors to management. The dominance of management is fact, but the fiction of investor control persists. From management authority comes control of management compensation. That this should be generous, even lavish, and with no necessary relation to performance, is the reality of modern economic life. This literate and learned book is for all who wish to learn the facts and consequences.”—John Kenneth Galbraith

“Bebchuk and Fried argue persuasively that executives of large companies have immense power, and that they use this power to pay themselves large amounts that are insufficiently related to performance. Nobody who reads this book will feel quite the same about Corporate America again.”—Oliver Hart, Harvard University, author of Firms, Contracts, and Financial Structure

“A profound and insightful analysis of the crisis in executive compensation.”—Ira Kay, Watson Wyatt Worldwide

“Lucian Bebchuk and Jesse Fried have brought to light one of the most important issues facing our society today. I agree enthusiastically and almost completely with their analysis of the problem.”—Arthur Levitt, Jr., former Chairman of the U.S. Securities and Exchange Commission

“Bebchuk and Fried present a powerful challenge to financial economists’ view that compensation arrangements are designed by boards seeking to increase shareholder value. They offer a compelling account of how managers’ influence has distorted executive pay. By showing how boards have failed to guard shareholder interests, Bebchuk and Fried raise fundamental questions concerning our corporate governance system and lay the ground for their proposed reforms. Their work will shape debates on executive compensation and corporate governance for years to come.”—Joseph Stiglitz, Nobel Laureate in Economics, author of The Roaring Nineties