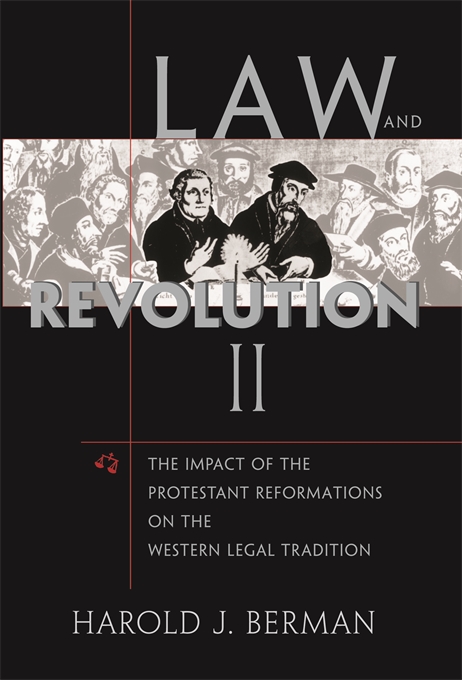 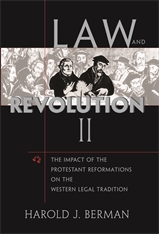 The Impact of the Protestant Reformations on the Western Legal Tradition

“Taken together, Berman’s two volumes offer a sweeping panorama of the rise of modern law in the West, from its medieval beginnings to the start of the eighteenth century. In scope, learning, and ambition there is nothing else quite like them, and they constitute one of the deepest contributions to scholarship to have emerged from the legal academy in decades. In calling attention to these neglected episodes in the history of Western law, Berman has raised a host of difficult questions for historical and philosophical investigation, and one can only hope that others will follow his footsteps and explore the territory he has charted.”—William B. Ewald, Constitutional Commentary

“For those interested in the ongoing debates about the social consequences of the Protestant Reformation for subsequent Western history, this book of great learning is a welcome contribution to the literature. [It] has also been a much anticipated book, coming now twenty years after Harold Berman’s path-breaking first installment, Law and Revolution: The Formation of the Western Legal Tradition. In the present volume, Berman continues his provocative analysis of theological and ecclesiastical roots of the legal tradition that has been developing in the West for nearly a millennium, but that he fears is presently in crisis… This second volume of Law and Revolution is a work of vast erudition that few other scholars would be capable of producing. The synthesis of legal and theological scholarship, as well as the integration of intellectual, ecclesiastical, and political developments, are crucial to the claims of this book and are impressive throughout. The author’s claims are persuasively argued and one can confidently conclude that scholars working on related issues in the future cannot safely ignore his conclusions.”—David VanDrunen, Westminster Theological Journal

“It is not necessary to share Berman’s belief in order to appreciate much in this book.”—Michael D. Gordon, American Historical Review

“Berman is at his best when illustrating the effect that a judicious study of law has on our appreciation of Western history. His meticulous and impassioned parsing of the theological and philosophical roots of the German legal academy or of the English adversarial system is instructive to a degree surpassed only by his previous work in Law and Revolution. His prescient call for an ‘integrative jurisprudence’ will surely be heeded, and is arguably already the norm in legal practice, though perhaps not in legal theory.”—Victor M. Mũniz-Fraticelli, Foundations of Political Theory

“The present volume…will be of interest mainly to the general reader seriously concerned about the moral direction of our troubled time. For such a reader there is much to learn and ponder in this compendious book. Berman gives close attention to the efforts of Lutheran theologians, jurists, and politicians to reconcile divine law and natural law, the former revealed in Scripture, the latter accessed by reason.”—Gerald Strauss, Law and History Review

“In the second volume of his magnum opus, Harold Berman intends to rescue from neglect Lutheran legal teachings, and does so by expanding his attention beyond Luther to include the works of the humanist theologian Philip Melanchthon, and the lesser-known Lutheran jurists, Johann Apel, Konrad Lagus, and Johann Oldendorp. His close reading of these jurists makes the most significant contribution to the study of early modern continental legal philosophy and its possible ramifications… Not only Europeans, but heirs of legal institutions and ways of thinking about states, rights, and religion that flowed from the European experience, need to heed the call to a more self-conscious and deliberate questioning of whether a narrative that traces the law’s liberating trajectory from confessionalism and beyond nationalism is persuasive at all. Berman…provides provocative and rewarding investigations of where and how our current dilemmas with that narrative began.”—A. G. Rieber, Law and Social Inquiry

“A unique contribution to the history of the Western legal tradition. Harold Berman is a master at integrating detail with larger themes, presenting the material in a way that the point is never lost. A great deal will be almost entirely new to English-speaking readers. The treatment of the development of jurisprudence within Protestant Germany is especially valuable. The role of ‘revolutions’ in shaping but still preserving the essence of the Western legal tradition is one that Berman has made his own. This is a substantial achievement.”—R.H. Helmholz, University of Chicago Law School

“A careful reading of this relevant volume, Law and Revolution, II, provides much food for thought. The author, Harold J. Berman, examines the present dilemma by looking at the past… This volume and its valuable footnotes contain a wealth of information… This volume is relevant for today.”—Byron Snapp, The Chalcedon Foundation

“A wonderfully stimulating work that highlights a very important aspect of the development of European law that has so far been largely neglected. Well written and lucidly presented, it maintains a good balance between the general and the specific, and is based throughout on original research of sources that are neither easily accessible nor easy to interpret. With this book, Harold Berman offers another distinguished contribution to legal scholarship.”—Reinhard Zimmerman, Max Planck Institute, Hamburg