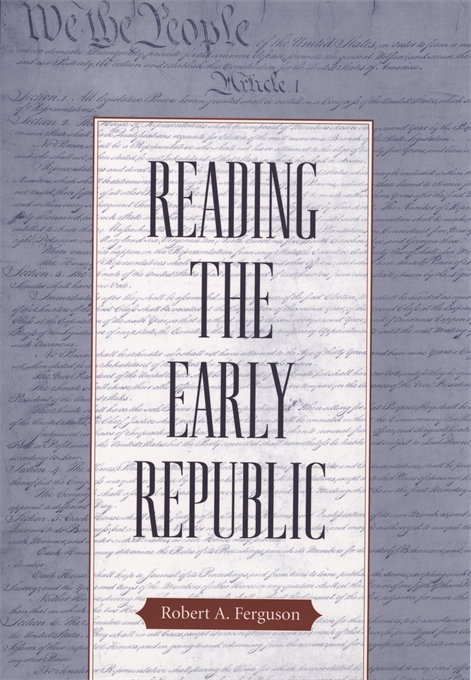 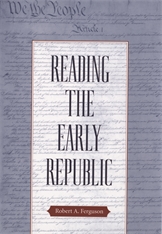 “A major contribution to literary and intellectual history, Reading the Early Republic also serves as a brilliant and formidable rebuttal to those policy makers, judges, and lawyers who are currently raiding the early Republic in the hope of settling current debates by recovering the original meanings of founding texts… Reading the Early Republic demonstrates why the history of political writing and rhetoric constitutes an important and distinct discipline from the history of political thought.”—Eric Slauter, William & Mary Quarterly

“Ferguson aspires to give us a knowledge of the past that remembers the intrinsic difference of its vitality, yet does not leave us to the crises of our moment without a sense of ‘answering relevance.’”—Elisa Tamarkin, Early American Literature

“Rejecting what he regards as over-simplified interpretations of the period’s literary output, Ferguson sets out to recover the variety of meanings that these texts conveyed to contemporaries. Drawing on a range of works, from those that have become canonical to those that have been marginalized, he finds that early republican writings were significantly more nuanced, complex and volatile than even the most sensitive critics have acknowledged. Ferguson proceeds to offer fresh readings of several different kinds of sources, including novels, pamphlets, journals, legal records, and slave narratives… Reading the Early Republic is wide-ranging and insightful. Opening out the texts in this way adds a new dimension to our understanding of the essential fluidity, volatility and contested quality of the early republic.”—Keith Mason, History

“[Reading the Early Republic] is best described as a cohesive collection of discrete essays designed to show that very close reading of selected texts and episodes can shed new light on our understanding of the Revolutionary era broadly conceived… It is written with remarkable clarity and moves along at a varied pace that never fails to engage us. Reading the Early Republic is an innovative and distinguished contribution that enriches our understanding of the period.”—Michael Kammen, Law and History Review

“Reading the Early Republic revisits some of the most emblematic words and texts of that period and brings to the fore some forgotten individuals and documents to produce a thoroughgoing historical analysis of the new nation. In the process, Ferguson develops a portrayal of the period that serves as a powerful corrective to recent histories that emphasize national unity and ideological familiarity… Ferguson has also written a book with a surprising degree of relevance, revealing his intentions to speak to an audience outside academia.”—Carolyn Eastman, New England Quarterly

“These fine essays analyze U.S. texts from the 1760s through the 1820s so as to illustrate the forms of expression, assumptions, conflicts, and ambivalences of the era. The texts include a remarkably broad spectrum, from the canonical Common Sense through slave narratives, notable court cases, popular novels, and the architecture of Monticello to The Last of the Mohicans. Two common themes linking the essays are that the language ‘was richer and more nuanced than their inheritors’ understood, and that the current generation could benefit from careful reconsideration of those complexities that are the foundation of American life. Useful insights abound.”—R.P. Gildrie, Choice