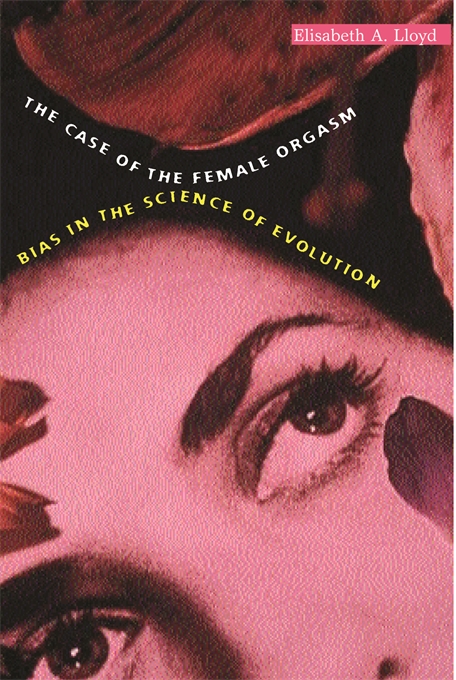 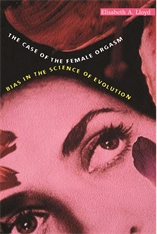 “Underlying biases exist throughout science, but surely nowhere in as extreme a form as in research into female sexuality… Elisabeth Lloyd neatly dissects the history of these biases and their results in The Case of the Female Orgasm.”—Sarah Venis, The Lancet

“In this scientific review of the literature on women’s ability to orgasm, Lloyd lined up thirty years’ worth of studies designed to prove that women’s orgasms evolved solely to make us better at reproducing and proceeds to demolish them all due to their crappy data, bogus assumptions, or fatal bias. She instead makes a case for men and women having separate, autonomous sexuality. Human orgasm evolved because men need it to reproduce, and women got it as a developmental byproduct. How women use that gift is ours to determine. Feminism and scientific theory can be uninspiring bedfellows, but Lloyd proves here that tenacity and hard work can bring them to a readable climax.”—Beth Brown, On Our Backs

“[Lloyd’s] study of evolution and orgasm offers the most thorough and serious treatment of the subject to date—and strongly rejects the claim that orgasm in women serves an evolutionary purpose. Lloyd has scrutinized 21 evolutionary accounts of female orgasm and makes a convincing case for the single account that treats orgasm as a happy accident, a byproduct of the role that male orgasm plays in reproduction and the sharing of early embryonic tissue by the male and female genitalia. The other 20 theories she dismisses as illogical or incompatible with data on women’s sexuality. This time the press has it right. Lloyd’s analysis is worth all the attention.”—Amanda Schaffer, Slate

“In this closely argued study, [Lloyd] shows how the leading evolutionary accounts of the human female orgasm are based on two flawed assumptions: that the female orgasm evolved because it contributed to reproductive success (‘adaptationism’), and that female sexuality is like male sexuality (‘androcentrism’). This is an important book that casts light on the biases that can prejudice science.”—PDS, The Guardian

“Lloyd summarizes dozens of evolutionary accounts of the female orgasm—and knocks them all down. Like [Stephen Jay] Gould, she thinks the female orgasm is purposeless; which is not to say pleasureless. And she extends the charge of bias, charging that too many scientists take the male-centered view that the female orgasm is closely linked to heterosexual intercourse and reproduction.”—Christopher Shea, The Boston Globe

“Upon your shelf…there probably isn’t a book on evolution and the female orgasm. That’s because it hasn’t been written until now… Evolutionarily speaking, the female orgasm is ‘for fun,’ says Lloyd, and her theory…adds to its more intellectual joie de vivre.”—Michelle Humphrey, Bust

“Lloyd asks whether female orgasm is really related to reproductive success. The search for an answer reads like a mystery story and involves the critical examination of 18 theories developed on the premise that the human female orgasm is an evolutionary adaptation. The author invalidates each of these theories by an examination of their assumptions and, in many cases, the frailty of their supporting data… With its 355 references, this book is a study of the power of a careful analysis of data to show the weaknesses of certain theories.”—W.P. Anderson, Choice

“The Case of the Female Orgasm is of particular interest because it offers a fairly accessible account of competing scientific theories, how they are presented (and accepted), and what evidence they are based on. The data on female orgasm is shockingly flimsy, and Lloyd nicely shows how even carefully conceived experiments (such as for testing the upsuck theories) present a host of problems. Far more troubling, however, is what the scientists do with that data, often using it as they see fit—or simply incorrectly using it… This is an important book, and highly recommended to all scientific practitioners (who might be reminded of the bias that can so easily creep into their work) as well as those who interested in everything from scientific methodology to the role of science in society.”—The Complete Review

“Lloyd, a biologist, philosopher and science historian, uses the human female orgasm (an evolutionary development unique among primates), and science’s wholly inadequate explanations for it, to focus on the ways science can be led astray by the biases of those practicing it.”—H.J. Kirchhoff, The Globe and Mail

“Lloyd’s book is penetrating and tantalizing, even intensely satisfying… Her findings about the scientific process really are something to scream about.”—Alison Motluk, The Globe and Mail

“Methodical and lucid, Elisabeth Lloyd’s The Case of the Female Orgasm is an exemplar of accessible science writing. Those interested in evolutionary biology, philosophy of science, and feminism will find the book an interesting, if perhaps occasionally frustrating, read… Lloyd offers a rigorous case study showing how political and methodological biases have distorted the practice and results of evolutionary investigations of female orgasm… Although parts of the book are somewhat technical, Lloyd carefully explains most of the crucial concepts and educated readers will find it generally accessible.”—Meynell Letitia, Hypatia

“It’s been 52 years since scientists first considered the female orgasm a legitimate object of scrutiny (thank you, Dr. Kinsey). But they still can’t settle on its raison d’etre… Lloyd knocks down all but one of the 21 existing explanations. Along the way, she makes a critical distinction between sexual arousal, which she says is critical in evolutionary terms because it makes women want to have sex (and thus results in pregnancy), and female orgasm, which she argues is merely a bonus… Lloyd settles on the unpopular but, she insists, most scientifically solid theory available… From an evolutionary perspective, female orgasm is superfluous… Lloyd hasn’t written off the possibility that an ‘obscure’ and ‘exquisitely designed’ Darwinian function has yet to be discovered. But for now, she makes a convincing case that from an evolutionary perspective, female orgasm is just the icing, not the cake.”—Sue Ferguson, Maclean’s

“She has an interesting and important set of theses. On top of that, her argument has a straightforward, logical structure…I recommend Lloyd’s book to all philosophers of biology and students of human evolution.”—Dr. Rob Loftis, Metapsychology

“The conclusion, Lloyd argues, must surely be that the female orgasm has no biological function. Rather, it’s on a par with the male nipple—an accident of shared developmental pathways in the early embryo. Because women need nipples to suckle their babies, men end up with rudimentary versions too. They may not give milk, but like the female’s they have erotic sensibilities. As for genitalia, because men need ejaculatory penises, women end up with clitorises capable of similar sexual pleasures. Lloyd reckons that biases in evolutionary thinking have blinkered generations of mostly male biologists. It is time to give up the adaptationist’s fallacy and face facts. The late Stephen Jay Gould, who encouraged Lloyd’s long-standing investigation, must be cheering from above.”—Gail Vines, New Scientist

“Lloyd is a philosopher of science interested in evolutionary biology, and she provides a measured scholarly evaluation of both the adaptive and nonadaptive explanations for human female orgasm… Her meticulously researched book examines 21 explanations for the evolution of female orgasm… The book becomes about much more than an aspect of human sexuality. It is an examination of how evolutionary biologists think, and how their system of gathering and evaluating knowledge can falter. Her reasoned approach is refreshingly free of jargon in a field that sometimes seems abstruse for its own sake; even if one does not agree with Lloyd’s conclusion, the book provides a blueprint of how to critically evaluate scientific arguments.”—Marlene Zuk, Perspectives in Biology and Medicine

“Elisabeth Lloyd provides a comprehensive and critical review of evolutionary explanations of the female orgasm. Through her extensive analysis of 37 years of research on the topic, she argues against the prominent theory that the female orgasm is an adaptation that has evolved to improve reproductive success… Lloyd provides a careful and impartial analysis of the validity of the findings from cross-cultural, animal, and human sexuality studies. Contrary to the adaptation perspective, Lloyd supports the theory, originally proposed in the late 1970s, that the female clitoris and orgasm are by-products of the embryological development of the penis and orgasm in males… The work touches on many of the biases that negatively affect scientific rigor and consequently (mis)shape our understanding of women’s sexual functioning.”—Jayne E. Stake and Amy K. Silberbogen, PsycCRITIQUES

“In this engaging and carefully argued account, philosopher Elisabeth Lloyd guides her readers through one of the most fascinating controversies in evolutionary theory.”—Mark E. Borrello, Quarterly Review of Biology

“Okay, you have to be a science nerd to read this, a Stephen Gould fan, but what’s here is [fascinating]. Really, the most radical book about how female orgasm has been so sensationally misunderstood and manipulated. Lloyd doesn’t draw political conclusions—but you sure will.”—Susie Bright, susiebright.blogs.com

“Lloyd’s book isn’t just a ‘must-read,’ it’s a must-own, must-cite, and must-assign-to-one’s-students. William James once defined philosophy as ‘an unusually stubborn effort to think clearly.’ This is the most stubborn effort I’ve ever seen to think clearly about female orgasm.”—Rachel Maines, author of The Technology of Orgasm

“The Case of the Female Orgasm is a review and analysis of the possible adaptive significance of the female orgasm. For decades, evolutionary biologists have questioned why this physiological and emotional response should occur in women; men need orgasm to propel sperm out of the penis and into a female reproductive tract to improve their reproductive success, but women need not orgasm to conceive. Thus female orgasm is a biological puzzle. Some evolutionary biologists have insisted that the response is adaptive while others consider female orgasm an ex-adaptation, a trait that appears only because it happens to appear in the other sex. Both camps have written extensively about their views, both in the popular literature and in academic writing, but to my knowledge, no book has focused solely on female orgasm.”—Meredith F. Small, author of Kids: How Biology and Culture Shape the Way We Raise Our Children

“This will make great bedside reading. What, after all, is sexier than a well-constructed argument? Lloyd provides a measured and scholarly evaluation of adaptive and non-adaptive explanations for human female orgasm, a trait that has been the subject of some controversy, and she does it without jargon or acrimony. It is a model of how to fairly and critically look at adaptation.”—Marlene Zuk, Professor of Biology, University of California at Riverside